Crippling self doubt washes over me in an awesome wave. I’m an open wound and the salt water burns. I don’t want to drown, but to open my mouth and breathe would be easier than to fight against the rip. I don’t want to be swept away or washed up on the shore. I have experienced the coast at it’s most unforgiving, it left me broken. I haven’t been to see a doctor about my knee. I’ve walked on it, I’ve swam on it, I’ve played squash on it. As the best trained professional of me, I gave self-diagnosed ‘everything is fine’. Of course, I don’t fully believe this to be true. I worry that the first gradient will ruin me again.

I put another eight miles on the flat under the waist belt of my backpack. Fully loaded with food and water I knew it was heavy enough. I switched my tent and sleeping mat, making the heaviest item more evenly distributed. Matt asked me to skim some stones so he could try to take a contrived photo. I didn’t want to put my bag on the damp seaweed or wet gravel, so I kept it on my back and squatted down to pick up some rocks that were great for skimming. I must have done this two, three, five hundred billion times based on how my thighs felt across the following miles.

For a while I tried to keep up with Matt and Dave. Even with their stopping to capture a moment on screen, I realised I couldn’t match their pace. When I was alone, I didn’t have this concern. I wasn’t worried about being left behind. Matt did his best impression of a concerned friend while they waited for me to catch up, asking if I was OK and then immediately mocking me for deliberately carrying 30kg on a casual Sunday stroll.

My legs hurt, a lot. But not my knee. The pain came in cycles, almost as and when I remembered I was uncomfortable. I returned to my new trick of counting my steps. One, two, one, two. Another wave. I retreated inside my shell and found new sanctuary in my own pace. Back inside my own head I began to remember that I am capable of anything. I had set myself a goal and I was going to achieve it, even if I had to take regular, several month long breaks to do it. I stopped being interested in how fast we were moving and remained looking inward.

I’ve never considered myself to be claustrophobic but the walls have closed in. The air has become thick. Cracks form on the surface. I am filled with all of these things but there is nowhere left for them to go. Expand, contract. My comfort zone is no longer comfortable. The space beyond is intimidating, spend too long thinking about it, too long staring at it and I’ll go insane. In pushing beyond the outer limit, breaking through the walls I realised this is it. The fear, the trembling, the abyss. 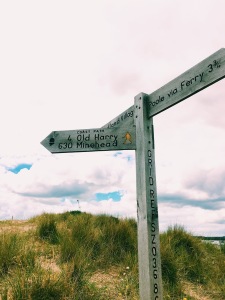 There are times when I want to be able to seek only comfort and security, take no risks. More often I refuse to settle. The moon tugs at the surface of my ocean, dragging it back and forth across the beach.  I want to stand up and be counted. The muscles in my legs have toughened. I’ve replaced two toe nails and most of the skin on my feet. My beginner’s confidence has been tempered in experience. I know now what I am capable of and how much is too much. A shorter overall journey, less ground to cover on each day, and greater respect for the coast. I am ready to overcome the waves I made for myself and confidently ride the swell to the finish line.