We awoke for our final hours in Helsinki before we would embark on our biggest journey of the trip. The plan was to be in Berlin by midnight the next day and we got train times, reservations and route plans sorted. If everything followed the schedule we would make it, just. Our biggest challenge was going to be getting from the Stockholm ferry terminal to the central station, if we failed to achieve that, the dream we had been living so far would collapse into an awful nightmare. Eventually, we decided the best form of action would be to wing it, like we had done so many times before. We briefly discussed how awfully we had actually planned for this trip, but regarded it as a massive learning curve. The time eventually came for us to leave Helsinki and embark once more on our ferry to return to Stockholm. We were fortunately blessed with a young Russian room-mate who was significantly quieter than his Finnish equivalent. Once aboard the boat we found that the Ice Hockey World Championship Finals were being played, and before dinner we caught most of the third-fourth place play off. We enjoyed plenty of food, neither of us making the mistake of mixing fish and meat gravy this time around. It then became necessary for us to take a lie down to let our stomachs settle. We then returned to the upper decks to indulge in a novelty sized Toblerone and a can of ice tea before checking out some of the bars. We were somewhat concerned as to the whereabouts of the other passengers, when upon entering one of the ‘pubs’ we found that the final of the ice hockey had begun and it was Sweden versus Finland; a local derby as such. After the first third, it was 1-1 and it could have gone either way but then Sweden seemed to forget that they were in a final and let Finland put another 5 past them. A highly exciting end to our stay in Scandinavia.

We awoke later than planned and rushed through a buffet breakfast, showering and packing as quickly as possible so that we could be off the boat as soon as the doors opened. We practically ran through the terminal, took out enough cash to cover the cost of a taxi and dived in. Panic was high, and our eyes locked on the clock. We made it to the station, ignored the fact that we needed to print our tickets and dived onto the train with minutes to spare; relief washing over the both of us in an awesome wave. We had made it, convinced we could defeat the train challenge. The ticket inspector passed through, and confirmed that our reservations would be accepted even though we did not have the required tickets and the journey continued without complaint. However, as we neared Malmo, we were informed that the train would not be continuing to Copenhagen for unspecified technical faults. The train rolled in, and we were informed we would have a twenty minute wait for a connection, which would mean we would just miss our next train to Hamburg. Things were looking dire, but we had an hour and a half to play with across the day. On arrival in Copenhagen, it became apparent that it is not possible to rely on public transport to make a 30 hour journey. The next train to Hamburg would not be for an hour and a half and we would miss the last train to Berlin. Knowing that Hamburg was still in our sights I got in touch with Jamie and Chris with the hope that they would be able to take us in for the night, and they so generously did.

On arrival in Hamburg we had to navigate the public transport system but arrived to find Jamie on his way down to the bus stop to meet us. We enjoyed jam on toast and apple and sour cherry juice for dinner before collapsing after a stressful day. We awoke the next morning, eager to continue to Berlin, and said our endlessly grateful farewells to the guys; with the not-quite-so-ill-meant wish that we would not see them so soon next time. On arrival in Berlin we threw our stuff down and headed straight out to enjoy the sights. First stop Alexanderplatz, from where we walked down to the Brandenburg gate and checked out the impressive Reichstag.

We then wandered some of the smaller streets before deciding it was time to indulge in the Berlin delicacy of the currywurst, which might be the best thing. We enjoyed this in the company of sparrows who were brave enough to take bread straight from your hand. After we had finished, the rain started to fall and we decided to experiment on the various Bahns. We first ended up in Potsdam, the Berlin equivalent of the Canary Wharf before checking out one of the many memorial sights of the Berlin Wall. The vast open space between the various barricades applied some serious perspective to my own sense of freedom.

After taking in the unusual, eerie atmosphere we decided to return to Alexanderplatz to find something to eat and drink, and to our delight the food and the beer was cheap. We then returned to the hostel where we were going to plan a night out. Once back in our room however we found Australian, Nara, who immediately invited us out with a couple of her friends on a pub crawl.

After freshening up, we met in the communal area picking up a beer from the hostel bar for one euro. It seemed that it would be criminal not to get drunk in Berlin. We were then introduced to Ben and Kieran, fellow Aussies but all independent travelers. We realized that we were already running late for the pub crawl and rushed out to try and catch up with it. Upon reaching the starting location, we failed to find any bars or clubs and grabbed a drink from the nearest off-license before deciding to craft our own crawl. We first headed back onto the train so that Ben and Nara could grab something to eat while the rest of us continued our drinking. We then returned to the hostel, conveniently nearby to pick up a couple more cheap beers before somehow discovering a bombed out train depot where we would find a trance-rave where we would party until dawn. When we left the club, we were all somewhat amazed to find it light out and we headed back to the hostel.

On discovering that it was 05:00 Keiran and I decided not to bother going to bed, and stayed in the communal area sharing music and stories. Eventually, as it got later we realized the rest of our friends would not be joining us any time soon and so we headed out to check out the more famous sections of the wall where the more iconic street art could be found.

We walked the length of the remaining wall, stopped for a coke and then decided that it would be pretty cool to checkout Checkpoint Charlie. After what seemed like forever, we thought we had found it and both felt incredibly underwhelmed and were later informed that had we turned one more corner we would have been more impressed. Disappointed, we felt one thing for it; more cheap beer. It didn’t take long for the fatigue of 36 hours on the go to set in and we soon retired for some much needed sleep.

After what seemed like the best sleep of my life, David and I got our stuff together, ate some breakfast said our farewells and then headed back towards the main station where we would be catching the next train to Dresden. The train was a new design to us, similar to those you would see in a movie; six seats in separate compartments with the aisle on one side of the train. Following the wild rush to find unreserved seats we settled down for a short trip across the Germany countryside.

We arrived in Dresden mid-afternoon and decided to explore the ‘new town’ where our hostel was located, north of the Elbe. It was another quarter of another city scattered with independent retailers, record shops and restaurants and I immediately took a liking to Dresden.

After covering most of the area twice we found yet another quiet Indian restaurant and tucked into what was fast becoming a staple part of our diet; a curry. We then headed back to the hostel, still feeling the effects of the Berlin bender. 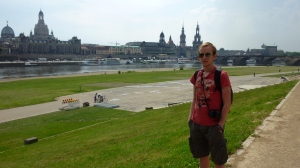 We took a slow approach to the next day, enjoying a leisurely breakfast and leaving the hostel just after noon. We headed south, towards the reconstructed old-town which offered an impressive view from our side of the Elbe. The buildings had been rebuilt with what appeared to be a mixture of new and old materials, some appearing to have only suffered smoke damage from the devastating bombing.

We managed to see most of the sights in the old town before the sky let loose a heavy down pour and forced us to shelter in a nearby café. Having been away for a month, we discussed any changes we had felt, things we might have learned, whether or not we had “found ourselves.” Once the weather had cleared we took a walk further into the city and found that beyond the old town, Dresden was being re-built with a much more modern style and it would seem that much of it’s former glory had sadly been scorched from the Earth. We took a stroll down a market in one of the larger parks in the city, enjoying the sights and smells of fresh goods before returning north of the river, where we stopped briefly at the hostel to get changed, and then headed out into the new town to sample one of Germany’s culinary gems; the doner kebab.