I woke up looking like a pirate, I had a shower and still looked like a pirate. It became quickly apparent that I was still drunk. David and I stumbled about, trying to get our things together as quickly as possible so that we would be out on time. We managed to get out of the hostel and onto the S-Bahn where we found that we hadn’t validated our tickets properly, but we were let off anyway. We made it to the station and fell into a couple of seats and were carried on to Bratislava.

On arrival the hangover had kicked in and the scorching heat of the day was making things particularly unpleasant. We made our way to the Backpackers Hostel where we spent the remainder of the day in recovery. Late in the evening, feeling somewhat better we headed down to the hostel’s bar and ordered some food before returning to bed to continue healing.

The next morning, feeling significantly better we grabbed some breakfast which consisted of bread, cream and jam which made a pleasant surprise from the usual meat and cheese challenge. We then headed out into the city, starting off at Bratislava Castle, which had been around since the Stone Age, having been modified and redeveloped and even destroyed at points throughout it’s history.

From the summit we had incredible views across the Danube to the newer half of the city dominated by Soviet style tower blocks and the aptly nicknamed UFO bridge. 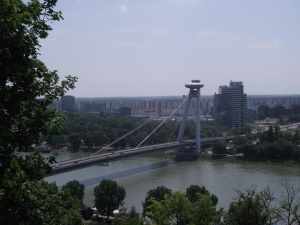 After exploring the castle grounds we headed down into the old town, which was similar in style to most European old towns we had already been to. Once in one of the smaller central squares we found Bagel and Coffee Dream where we stopped to enjoy some lunch.

Following a Mexican bagel and strawberry cooler, we explored what was left of the city, quickly establishing that it was one of the smallest we had visited yet. We opted not to cross the river, as it looked like it would have been similar to Warsaw. We stopped off in a supermarket to grab some fruit and enjoyed this under the parliament buildings before returning to the hostel. 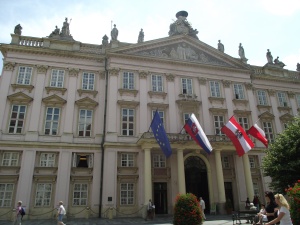 After a brief stop, we headed out to find some dinner eventually settling in the basement of Prašná Bašta where I enjoyed pork with potato pancakes and David ordered what was becoming his regular favourite, salmon.

After eating we headed back fairly early, I was still feeling the effects of the Viennese blow-out and wasn’t up for facing more alcohol yet. Over the course of the night, we were disturbed by some German lads and ladies on tour, who did their best to be quiet but once they’d fallen asleep managed to snore at hazardous volumes for the rest of the night.

One response to “Slovakia: Hangover City”