Having spent most of the morning recovering from too much beer a plan was eventually made! My good friend from Twitter, Suzy, lives incredibly close to the Apple hostel and she talked me into leaving the comfort of my bed for brunch. After a minor hiccup on my behalf I made it to Continental. As I don’t have a phone at the moment, all communication was done through Twitter, and once I was outside I was on my own. Suzy had been kind enough to tell me that she had a table out in the back. I walked on through, straight past Suzy and then back again after I realized she was the only person in the back. She introduced me to her husband, Jeff and I got stuck into the menu.

For a while, I had been annoyed with myself at becoming a vegetarian before coming to the U.S. I wouldn’t be able to try a Philly cheesesteak! What was I thinking? The obvious answer; I wasn’t. Anyway, to my delight on Continental’s menu was a veggie cheesesteak and I had no choice but to order it. Thick cut Portobello mushrooms, red peppers and onions, drizzled with cheese and a huge stack of shoestring fries. Goodbye hangover!

Before the food arrived, a couple of Suzy’s friends; Troy and Jo joined us. I’m sad to say that in my haste I forgot my camera, so I was unable to get a group shot of my current companions, or of my brunch! I had a very pleasant time simply chilling out and listening to the guys chat about their plans for the rest of the day which consisted primarily of eating and drinking. Once we had all enjoyed our food and got the bill we parted ways, with Suzy taking me to the Reading Terminal Market, via the Gallery. 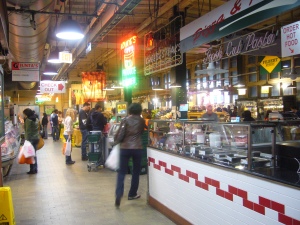 This was a bit of an eye-opener for me, as I had initially assumed that shopping in the States would be a similar experience to back home. I was to be proved wrong in the market. Independent food outlets, greengrocers, fish-mongers, bakeries, all spread out in one place. It was, like most good markets, a brilliant experience. Suzy was kind enough to buy me a praline cookie; which is, simply put, pecan flavoured sugar.

From the market we walked through china town. It still amazes me how the atmosphere of a city can change so quickly once you’ve crossed a road or walked another block. 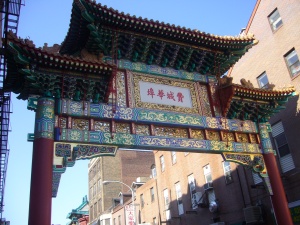 After china town we passed through Franklin Park, where Suzy showed me the sights of the city on a mini-golf course. We didn’t stop for a round.

We then continued on to Elfreth’s Alley. Elfreth’s is popularly known as the nations oldest residential street and it looks like a slice of Europe has been dropped into the city. 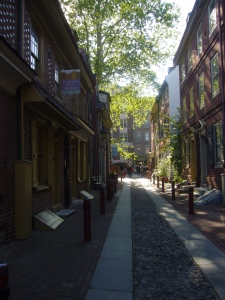 We walked around for a while, before Suzy pointed out where she lived and worked. Eventually we parted way, with me being content that I had once again managed to meet a friend from the internet in real life. 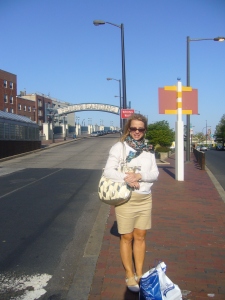