The Toronto Blue Jays vs. The New York Yankees

Having finished up in Ottawa my next move was for Toronto. Ever since I had planned the trip, my Gran had put me in touch with the other half of our family who live across North America and the Caribbean. When I reached Toronto I would be staying with Lisa Hall and her family, who I believe I may have had more contact with than my own mother while I’ve been away! (Sorry Mum!) The plan when I arrived was to meet up with Lisa’s daughter Chloe and she would take me to the baseball game.

The bus ride to Toronto was a mere five and a half hours, and I arrived late in the afternoon. I made my way to Dundas Square, Toronto’s attempt at Times Square, where I met Chloe and her friend Sarah.

The initial plan was to head to Union Station where it was believed I could leave my bag in a locker, however, once we arrived it turned out that there were no longer any lockers at Union. The only place in the city that was believed to have lockers was the bus station that I had just been at. Back across the city we went, and after dealing with machine and change issues, my bag was locked away and we caught a cab back across town to the Rogers Centre. Looming over the centre is the iconic CN Tower, which Chloe had informed me you could get strapped into a harness and walk around the edge of the tower. Not for me. We made our way inside the stadium. 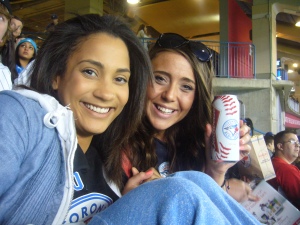 I quickly found out I was onto a winner, Sarah worked for the marketing department of the Blue Jays and scored Chloe and I a free t-shirt each. We picked up a couple of beers and took our seats. 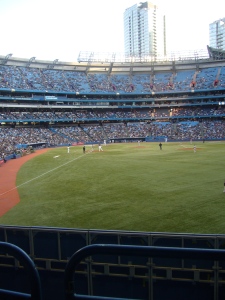 My knowledge of baseball was and still is pretty limited, but after the first two innings I was getting the hang of what was going on and enjoying the atmosphere. There are nine innings, each team has to get three players of the opposition out in each innings either by strike-out or catching them out. 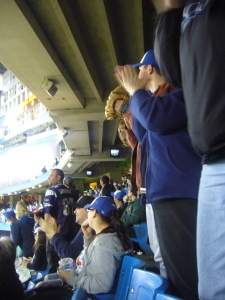 There were plenty of high-hit balls and shots into the crowd, I’m both glad and disappointed none ended up where we were sat. It would have been perfect to have a ball to take away, but quite the opposite end of the scale if I’d caught it with my face. A baseball game is a pretty big excuse for locals to get together, get drunk and heckle the opposition and everyone there seems to have an excellent time. I was greatly amused by Chloe and Sarah’s constant comments on how bad Jose Bautista was as a player, and then on his final ball hit a two home-runner and then again with a single home run to win seal the game for the Jays.

After the game came to a close, we headed out of the stadium. Sarah had ideas about going out with her friends from work, Chloe was staying with friends nearer the city as she was off to stay in a cottage in what she said was her only weekend off for the rest of the year, and I was about to find my way back to Lisa’s house. Chloe took me as far as Union Station, where I picked up a ticket for the go train, got on board what was fortunately the right train and manage to meet Lisa at the other end in Port Credit. Once back at what will be my home for the next few days at least I was shown my own room and couldn’t wait to get my first night of sleep to myself.