The Rocky Mountaineer: Calgary to Vancouver, Via Kanloops

The sun was just beginning to rise when I made my way out of the HI Hostel in Calgary to find my way to the Rocky Mountaineer station. A short walk away and I found myself checking in with loads of time to spare. I had received an email earlier in the week to inform me that the Canadian Pacific Railway workers were on strike which may result in part of my journey being made by coach rather than by train. I figured this probably wouldn’t be too much of an issue for me as I was more interested in seeing the scenery than the mode of transport. On arrival I was informed that although the workers had returned to the tracks there were up to sixty freight trains abandoned on the line between Calgary and Kamloops and that the journey would be made by coach. Some of the other guests seemed a little disgruntled by this, but I figure it’s not the Mountaineer’s fault that this has happened so suck it up and enjoy the ride. That said, it would turn out that all but one other person on the trip was probably retired and I guess that they would have found the train significantly more comfortable than the coach. Anyway, on with the ride!

The journey began by following the Bow River towards Banff, passing the Olympic Park where Eddie the Eagle literally made a name for himself. 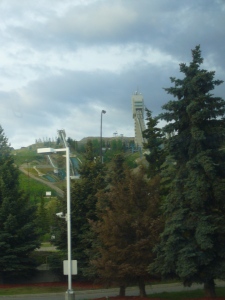 As we drew closer to Banff I got my first serious sight of the mountains we would be crossing and I was in complete awe. I’m a big fan of mountains, which is one of the reasons why I did this trip, alongside a desire that I’ve had for nearly ten years to come to this part of the world. Once in Banff we made a change, picked up some more passengers and began our journey. This first section was totally amazing for me, the mountains were incredible and we moved on from the Bow to the Kicking Horse river. 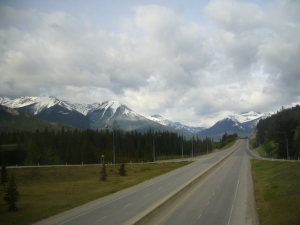 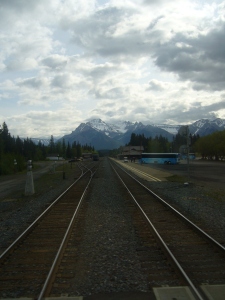 One of the first sights upon arriving in Banff was one that will probably stay with me long after this trip is over. In the sparsely wooded roadside there was a huge brown lump and suddenly the call of “bear on the right!” comes down the coach and this lump is walking, prowling the edge of the forest. Incredible, the Canadian checklist has been surpassed. The journey then continued in high spirits having been so lucky so early. The coach wound through the snow-capped mountains, coniferous forests, travelling alongside the Kicking Horse River and the railway line that we should have been on. 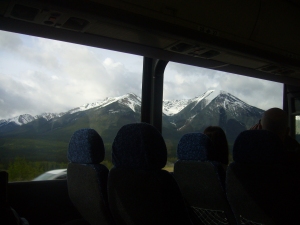 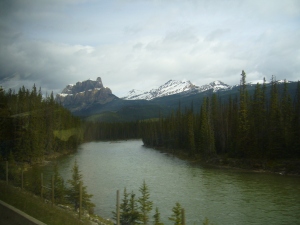 Every stage of the journey for me was breath-taking and I was completely in awe of the power of nature that pushed these monoliths out of the Earth. The coach made its first stop at Glacier Park Lodge in Rogers Pass. Had we been on the train there would have been no stopping and no opportunity for me to feel the snow under my feet, or to see the Stellar Jay, or watch marmots stand guard to each vehicle that passed through their nesting area. 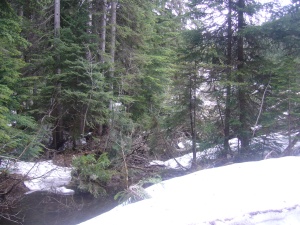 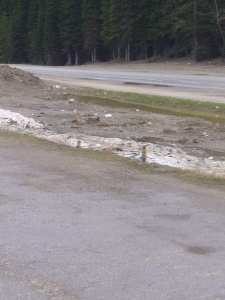 While we had stopped, our guide, Heather, had managed to pick up some coffee for us all and I had my first taste of Tim Horton’s, which is best described as the Canadian equivalent of Starbucks. I’d seen them everywhere and people seemed to actually exchange money for the goods. We boarded the coach once more and drove onwards to the West, slowly gaining on our night’s accommodation is Kamloops. Our lunch was served to us at Three Valley Gap. The family that own this resort had purchased buildings from the local area and built themselves a small ghost town which gave us something to enjoy before setting out once more. The grounds were also home to a roundhouse which held old trains and carriages and a garage containing very old and I expect expensive Ford models. 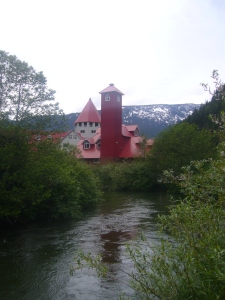 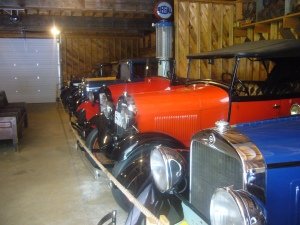 From Three Valley Gap our journey took us to the point where the final peg was hammered into the Trans-Canadian railway and saw one of the freight trains being moved onward following the strikes. This was an opportunity for us all to appreciate exactly why we were unable to travel our first day by train. It took well over ten minutes for the freight train to pass, not because it was moving slowly but because it was several miles long. Across the duration of the journey we would see several of these mile long trains just sitting, waiting for the backlog to clear so that they could venture on to their final destinations. 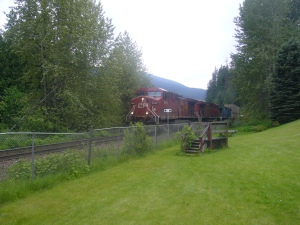 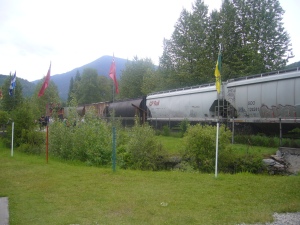 We continued back on the coach, passing through small communities, around lakes and occasionally through the clouds. We made good time into Kamloops, arriving dead on schedule and were delivered to the suites where we would be staying for the night. Kamloops turned out to be the smallest place I had stopped at on the trip so far and it took me less than hour to cover the city centre. It’s also one of the lowest cities I’d walked through, I never once found myself gazing up at the sky through towers of steel and concrete. The night was quiet, and in true traveller fashion I couldn’t work out why. It wasn’t until I made it back to my hotel room that I remembered that it was a Sunday. People would be at home getting ready to face the Monday morning blues. I hit my bed at an unreasonably early hour, the long day had drained me and I knew I had another one ahead of me. 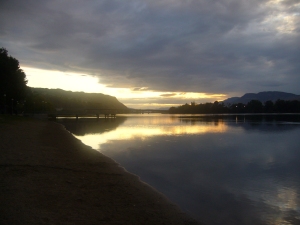 Leaving Kamloops was interesting, the scenery was so very different from what I had been subjected to during the first leg of the route. It was very arid, almost desert-like and we would be taking the train! At first, I wasn’t as excited as my other passengers but once the journey had got under way the convenience and comfort that came with being on the train made me realise what we’d missed out on during the previous day. 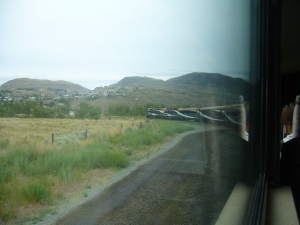 However, I was content with the fact that I’d been able to see some sights through the mountains that would have been denied to me if we’d been able to be on the train for the whole trip. The best of both worlds had been attained. Anyway, the views of the West were equally spectacular as the mountains of the west had been. 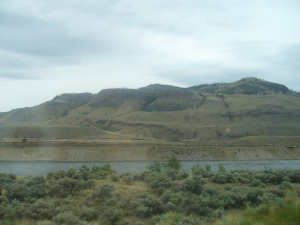 We followed the Thompson river, catching glimpses of bald eagles, osprey and the occasional deer. The river eventually came to its confluence with the Fraser before it passed through the Gates of Hell, a short stretch of the river that is forced through a gorge where the rapids become vicious. 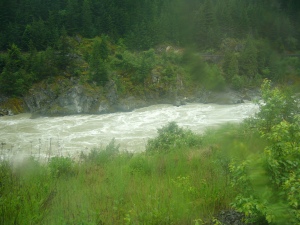 Soon enough the snow began to appear on the mountain tops and we were approaching the Cascades and the Coastal Mountains. We had a lot of rain as we began making our descent towards the coast and the clouds that wrapped around the snow-caps were fantastic. After another few hours the land began to flatten out, farms began to appear and a serious settlement rose out of the ground; we were approaching Vancouver and fast. 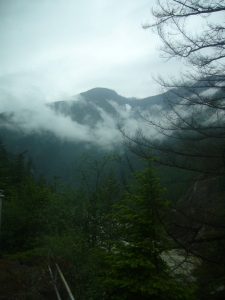 Once the train pulled into the station, we disembarked, grabbed our bags said quick goodbyes and almost everyone got in the queue for a taxi. I was better prepared and took a seat. After a short wait, the train was early if you can believe that, my good friend Mike Simpson arrived to drive me to his apartment. I’d met Mike in Stockholm last year along with his travel-buddy Ivan. They’d stayed with me last August for the Reading Festival and now it was time to repay the favour.