Good news guys, some of you are probably already aware I started work on Friday and if everything goes well I’ll be in Melbourne for at least six months. Next up; finding a place to live!

Also, I’m now up on Instagram. Maybe check it out?

Settling in the City

I’m gradually becoming more comfortable with the city, sometimes leaving the hostel without a map. I’m pretty well orientated and can point people in the direction of some of the city’s sights if asked. I took a couple of my dorm mates out around the city recently and we made a full day of it. 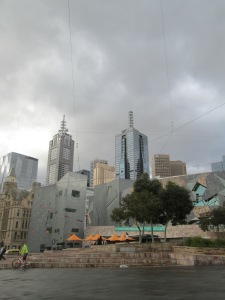 I love this city and I’m surprised when people aren’t sure about it. I’m big on getting out and exploring, learning where things are and finding out what’s good and what’s not. One of the hightlights of the CBD (that’s the Central Business District by the way) are the lanes and arcades that cross the blocks between Bourke and Collins Streets.

I’ve said before about how these are touted in every guidebook and it is completely justified. I’ve found delicious coffee, awesome vegetarian burgers and mind blowing street art everywhere. I honestly believe that getting to know this part of the city will change anyone’s mind about it and I am genuinely excited about the prospect of learning more about the area.

If that isn’t enough, then what about getting around the inner suburbs? I’ve spent some time in Richmond and South Melbourne, coming to an understanding of how the city works. I’m learning to use the tram and have got a myki pass and knowledge of a couple of routes; mainly the ones I’ll be using for work.

Richmond is particularly cool. Again, there’s plenty of incredible street art about and it’s not too far from the main city. You can walk around most of the sports arenas to get there.

There’s something remarkably familiar about the main streets through each suburb. I don’t know if it reminds me of North America or somewhere in Europe, or as I’ve said before; a combination of everywhere. The way the shop signs hang across the pavement under the covers leads me to think of the 90s but I can’t place why.

South Melbourne is interesting, the variety of architecture is incredible. One end of a street can be classical colonial and the other is modern chrome and glass. A little further into the suburb is the Alexander Park where the F1 takes place. I’m already beginning to fill my calendar with sporting events that will take place in the city over the next year.

I’m excited about the prospect of being in this city for at least another six months!