Last weekend came and went, almost unnoticed. A WhatsApp message from my Mum saying “Can’t believe you left the UK a year ago!” was the only real indication that so many days had passed in such a seemingly short space of time. I could say I can’t believe it either, but I can. I’ve done so much, at the same time so very little.

A couple of days ago I was on the tram to work and somebody sits down opposite me and taps me on the knee. I think he might have tried to get my attention with words before this. I never expect to run into somebody who might know me in Melbourne so I don’t really expect to be addressed on public transport. I look up and there’s this guy who looks vaguely familiar. I don’t think I know who he is. He knows me though, he starts talking about Oasis Backpackers in Mildura and then I remember. This is one of two guys who, on what I think might have been my last night at the hostel, ran into one of the rooms and released the fire extinguisher to wreck it’s foamy havoc on the unsuspecting occupiers. I don’t remember his name, but it’s ok because he can’t remember mine. We talk briefly, I ask where in the city he’s staying and he’s at Nomads on A’Beckett Street. Small world. Smaller country. 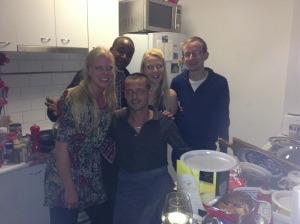 I spent three weeks in the hostel near to Flagstaff Gardens, behind the Queen Victoria Market. I don’t look back on them with too much fondness. Nomads was, as I knew it was back from when I booked it, a party hostel. It wasn’t my kind of party though, there was too much emphasis on forcing people to have a certain kind of fun. I guess I was wrong when I thought I was still up for the same kind of good times that everyone else was here for. That said, I’ve considered the good times that I did have there. Those few days when I had a hostel family. Emily, Margriet and even the somewhat bizarre Arnold made coming back to the hostel feel a little bit like home. Sure, all we did was drink goon and get wrapped up in distinctly average nights out but it was kind of fun. By the end of my time there, it was too much. Coming home from work at 8pm, fighting to find space in a kitchen barely big enough for four people, let alone the forty who were all trying to fix up a cheap meal didn’t even come close to a pleasant experience. I had to get out.

Then came a hilarious week living with Matt and Sarah. We were all sat on the sofas one day and Sarah looks at me with this mischievous smile spreading across her face. She offers me her hand, pull my finger she says. My face takes on the same happy glow. I know Matt’s not happy about this. He’s enjoyed a couple of days where Sarah’s been keeping the farts to a minimum but know she’s offering to let the floodgates open. I have two choices. I pull her finger and we descend into the next level of the comfort zone or I keep her bottled up for another couple of days. I say I have two choices, I’m lying. In this situation, there is only one choice. You pull the finger hoping that the resulting fart has been worth the build up. It doesn’t really matter all that much when it’s done because it’s a fart, it’s still funny. I’d like to say to Matt that I’m sorry, but I’m really not. Then of course there was my favourite night of my stay with them. They’d been out at a fancy dress party, they’d converted onesies and animal hats into Carebear costumes. I was on the verge of sleep when I heard the sound of a couple of drunks stumbling back to the apartment. Sarah’s had so much fun that she promptly falls asleep on the bathroom floor as if it’s the most natural thing in the world. Sadly, these too hooligans are heading back home at the end of this weekend. I know I’m going to have my work cut out of me finding two people who enjoy whiskey, beer drinking and my company as much as them. 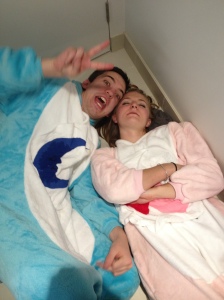 It was while I was staying with Matt and Sarah that I was offered the empty room in Southbank where I would spend the most of my first year in Melbourne.Finally there was a brief spell in Richmond either side of living in a tent for three of the most surprising months of my life so far. I’d had two jobs, plenty of trips beyond the city limits, explored a good numbers of Melbourne’s famous cafes, restaurants and bars by the time I would come to leave the city. It’s these things that I really want to reflect on in this post, the places I’ve been, the adventures I’ve had. There have been four major excursions that I think are more than worthy of a mention. Maybe like me, you’ll want to refresh your memories and see what they were all about;

It didn’t take long for us to be on the road and begin winding along the rugged Victorian coast line. Our first destination was to be Kennet River, the reason for this being that I’ve not really seen much in the way of wildlife since I’ve been in Australia. Kennet River is famous for it’s koalas and as we pulled into the small coastal village it took less than 10 seconds to spot the first.

We piled into a mini-bus to begin our tour of the local vineyards. I’ve often seen it mentioned that parts of south Australia, California and South Africa all have climate zones similar to that of the Mediterranean, and having been to most of those areas I found it particularly interesting to see how similar the landscapes were. The rollings hills of Gippsland could have easily been the low hills of the Sierra Nevada ranges. Then, nice and early, the drinking began.

It was an early start for a Saturday as I flew out from Melbourne. I’d spent the previous night enjoying some Christmas drinks with my new colleagues and they had been very persuasive and I always seemed to have a fresh drink in front of me whenever I mentioned that I had to get up in the morning. Leaving Melbourne turned out to be quite a surreal experience. Having spent almost 4 months there I’ve started to think of it as home and I was almost a little sad to say goodbye.

On a Friday night at the end of the summer, Elena picked me up after work and we drove down to her family’s summer house in Dromana. With plans to head to the view points on the way up Arthur’s Seat, head to the Point Nepean National Park and the Peninsula Hot Springs an early night was in order to give us the highest possible chance of getting up in the morning to crack on with the day’s business.

Then of course, there’s my most recent adventure and without a doubt the most eye-opening, unique and perhaps even challenging experience of my travels to date; orange picking on the edge of the outback. In the three months that I was there I had so much to write about that it would be difficult to suggest where to flick back to for a brief overview. Fortunately, at the time I took a minute to do just that!

I still remember when Bastien arrived at the Oasis hostel. It was my first morning, I hadn’t been awake for very long. I was reading the gossip column on the BBC sport page on my phone. The door clattered open and it was the smell that hit me first; it was a cold mix of damp and tobacco. Then this bearded, flannel shirt wearing French guy stumbles in, making introductions and chatter about sleeping out in the rain. It never crossed my mind that this homeless looking chap would be they key to completing my regional work.

Then of course, there’s Melbourne itself but I’m sure by now you’ve had your fill of me telling you that actually, yes, this is the most livable city in the world, and as it happens, yes, I do have an extensive lists of reasons why. The bars, the restaurants, the beaches, the attractions, everything has combined to make this year up there in the top five years of all time.

This might have even been the first year in the past five that I’ve spent twelve months in the same country. Strange as it may be, I feel like I’ve achieved more, gone further than I ever could have in twelve months at home in the UK. That touches on what I think I’ve come to have a better understanding of now, more than ever. Maybe you remember when Facebook had a box on your profile for a little message, a quote maybe, your favourite line in a song. A friend of mine, for a very long time, had a line. I don’t know what it’s from or who said it. “How hard can it be to decide to be in a good mood and then, just be in a good mood?” Now, I’m going to go ahead and take that completely out of context and expand it into a solid piece of life advice. Honestly, by now you probably have a pretty good idea about what makes you happy, the steps you can take to get there. What’s stopping you? You can’t blame it on the country you’re in. It’s just a case of motivation, with maybe just a little pinch of desire. I’m not saying that you should wake up in the morning, scream “carpe diem!” at the top of your lungs and march off into your own personal search for fulfilment, unless of course, that’s what works for you. Nobody else is going to take responsibility for your good mood, or the direction your life is moving in. Just, you know, do what ever it is that you need to do to make the most of your day. I think you’ll be less surprised that you might imagine when your life starts to follow in the same direction.