There comes a moment when you realise that you’re not travelling for other people anymore, I’m not doing things with the thought of writing up a vaguely interesting, occasionally funny, always lengthy post on this one thing that I did that you’ve probably heard of in a guide book. For a few weeks it concerned me that this might mean that the blog would fade away. How could I possibly keep my audience entertained if I wasn’t doing things? Then I remembered that I actually enjoy writing it for me as much as anyone else and thought sod it. I’ll just write some stuff, if you guys want to read it you can. Who knows, you might even enjoy it. 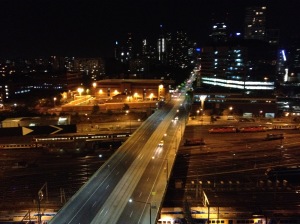 Last weekend was what you could consider an almost normal weekend. With Halloween on the Friday night, one of my generous work colleagues Shannah decided to throw a bit of a party. Maybe you know, maybe you don’t, I get a bit of a kick out of fancy dress and this year was no exception. I was in a pretty fortunate position; normally I do my own face paint badly, or I spend too-much money on one article of clothing that constitutes as a costume, this year I had almost everything I needed for my costume and Elena’s got some skills when it comes to make up. We may have been almost two hours late to the party due to the overwhelming demands of our requirements for perfection, but we were both pretty pleased with our creepy toy-like get ups when we finally made it out of the house. A few drinks and enough effort on the costume front from the other guests; Kevin Bacon, a promiscuous Nun, a sugar skull, a brutally murdered bridal party and of course, my favourite ever Halloween costume, a bubble bath, made for a pretty good end to the week, start of the weekend, however you want to look at it. 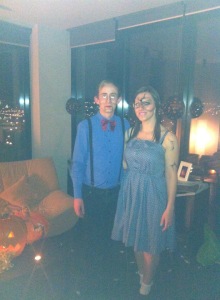 Things continued in their rich vein of form on the Saturday. My good friend Raoul, who you may remember from previous posts as being a man with a magnificent beard, was in town. He’d been spending the last few months road-tripping along Australia’s south coast from Perth. Not one of the most glamorous or well known routes, but from the sounds of things certainly one to be well considered. He bowls up to the bar at the Alehouse Project with the same degree of comfort and confidence that I remember the first, and last, time we met in Montreal. Little and much has changed. He was sporting some rather rugged stubble instead of the once luscious beard, sun kissed blonde hair was bouncing off his shoulders. I could have easily mistaken him for a surf-keen Brunswick hipster. Raoul is partly responsible for my steadily increasing interest in beer, which explains why we were at the Alehouse Project. I noticed behind the bar while we were there a little plaque from Time Out suggesting that it may have won the best bar in Melbourne award for 2014. I guess I’m going to have to find somewhere new to enjoy a beer now that it’s been publicly recognised as a good joint. Just kidding, for as long as they’re putting on a delicious, regular changing menu of beer, I’ll keep on coming back. Anyway, beyond catching up on what we’ve been up to over the past few weeks, months and years, the conversation centralised on beer.

I realised quite how small-an-impression my scratches on the surface of the craft-beer movement had made. What we have here is a man who is truly passionate about his hops. I’m still in the “I’ve never heard of it, I’ll try it” stage of my interest. I’ve only recently progressed from binge drinking whatever is on tap for the cheapest price to actually considering what I might genuinely enjoy drinking.  Raoul, on the other hand, is at a point where he’s experimenting with home brews, pairing beers with food, and looking into a way in which he can spend the next five years working in the industry. He’s even gone as far as to try and find a hop farm to work on for his regional work. I think the next time he’s in town, I’ll be spending a little more time learning as much as I can from my craft-beer mentor. 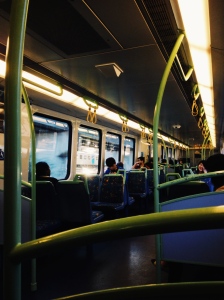 Time in between the weekends is, as you would expect, filled with the routine of going to and from work. Hardly any more exciting than the life that you’re enjoying from the comfort of your home country. That said, every so often I catch the faint shimmer of difference on the finer details of the everyday. The morning commute rarely feels British. To begin with a tram immediately gives the journey a continental feel. The delays, inconsistencies and complaints are all rather common of the public transport system at home. The train isn’t all that different. The seating arrangement strikes me as incredibly inefficient. You could easily squeeze twice as many in, if this was a First Great Western or a South West service then sure, there would be less legroom, but none of these people would choose to stand. Of course, the train is rarely on time. It’s difficult to say why this is, poor infrastructure, dated technology, corporate monopoly are all likely candidates. Then, as you’d expect, the rail network is completely unfit for purpose if it rains. Fortunately, it seems to cope a little better in the heat than the services at home.

Flashes of colour flicker across the window as the carriage passes through the brick cutting galleries of the local street artists. Gardens pass by, one in particular stands out. Maybe it’s a school, or community centre, I don’t know. It has a vine-yard rolling over a west-facing slope. I guess it could even be a home in these parts, most people seem to be fairly well off. It’s a longer journey than my former commute from Basingstoke to Hook, almost double. The inner eastern suburbs pass by as white text on blue placards fixed to red brick walls. Burnley, Hawthorn, Glen Ferrie. Promises of a high street pass below. Brief eye contact on this train, through the window on to the platform, across the asphalt into the city-bound window of an identical carriage. Never a glimmer of recognition, or understanding. The old fleeting glance of another being equally afraid of making a lasting connection.

A lunch break in one of the office court yards. It feels warm, almost tropical. The breeze has enough heat to it to remind me that, in a few months, it won’t be refreshing anymore. It’s not unpleasant, yet. It’s a good heat. Beyond the walls, I can hear parrots whistling and chirping in the trees. They’re out of sight. In front of me lies a copy of Hemingway’s The Old Man And The Sea. If I close my eyes then I could be anywhere in the world, perhaps on the Cuban shoreline, watching fishing boats disappear on the horizon. I picture white-washed walls, a clear, blue, unbroken sky. Where is this really? Work. Two huge black barbecues sit before me under vast black canopies. Rust stains are splashed on the glass surface of the table, the fabric of the chair, the concrete of the floor. Windows fill the walls that surround me, the sunshine glints of every surface as a constant, pleasant reminder that none of this is really all that bad. 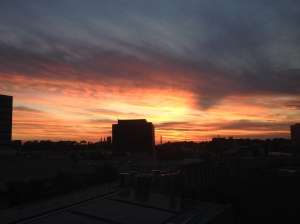 On the evening return, sunlight burns through the windows as the train pulls into Richmond. The skyscrapers coated in a golden haze. One day I’ll get off here just to capture a photograph. A promise to myself that I’ll never forget how sublime Melbourne looks from here. This isn’t a feeling I’d normally associate with home. I wonder when, if ever, Basingstoke has ever looked good. The original, obvious answer is no, absolutely not. How could anyone consider somewhere so dull as being beautiful. I look back to the skyline, thinking of the grace, charm, and style that Melbourne exudes. Then it occurred to me that I would never see Melbourne at it’s most splendid, under a thick blanket of snow. Basingstoke, it would seem, has had it’s moments of majesty. I never once thought that it would be winter that I would miss. The usually ugly, yellow glow of the former street lamps would become the perfect illuminations in the cold, white nights. The one I know the best, beyond my old bedroom window, lingers still in my memory as solid white flakes pass through the beams. Powder builds up on the top of the fence, the shed roof, the patio paving. The promise of a pure crisp morning. The unbroken layer of snow on the back field. Impurities, patches, dirt, all buried, all be it briefly, until the first foot prints break the surface. It is in that moment that Basingstoke is redeemed, it’s worst parts buried under a blanket of snow. 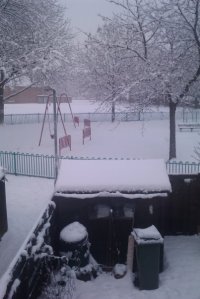 Winter approaches those at home, soon, if only for a minute, people will forget that it’s cold and miserable and enjoy the pristine beauty of the big freeze. Meanwhile, summer comes to Melbourne and I begin to consider how on earth I’m going to cope up on the fifth floor in forty degree heat. Sometimes, I realise, Melbourne doesn’t have it all.

3 responses to “Melbourne: The Everyday”