After all my criticism of India’s road laws, systems and erratic use of lanes, the highway from Jaipur to Agra took me by surprise. I assume that because it’s a toll road somebody is actually ensuring it’s of good quality, the money paid for using it goes back into the roads upkeep. It was smooth sealed, tarmac that, once again, somebody had taken the time to paint lines on. It ran almost the entire way. The traffic was unbelievably light, we had a clear easy run right up until the toll road ended. The landscape between Jaipur and Agra was a vast flat plain, broken occasionally by huge ridges that rose up almost perpendicular to the ground. The final stretch of the journey was a wreck by comparison. Pot holes, dirt mounds, barely wide enough for one vehicle. It was here, however, that I found India to appear at it’s most romantic. As close, I imagined, to the way that Rudyard Kipling might have seen it. Tall silver birches grew amongst trees that I have no name for, surrounding the villages, lining the roads. The people were still poor but with a rose-tint in my eye, I saw them as survivors. It was quite the image that I began constructing, it’s progress halted at the sight of a child, quite comfortably squatting to defecate on the side of the road. Life in India is not a Disney movie, if there is a happy ending here, it’s still a long way off yet.

The closer we got to Agra, the faster my idea of a beautiful India was destroyed. It was, much to my displeasure, becoming more and more like New Delhi. There was a sense of disappointment that perhaps we hadn’t saved the best for last. Agra is one of the areas in India that has not so much embraced it’s tourism draw, but fallen desperately at it’s feet. Home to what I would consider to be the country’s most famous landmark, the number of people who make an annual visit but at least be in the millions. Yet, it looks like none of their money remains in the city. High walls topped with razor wire surround official buildings and the hotels that are presumably preferred by foreign visitors. When we reached our hotel we found it opposite a barren wasteland. Fires glowed over the dusty ground. Tarpaulin structures lean against the trees. People are living out there and here we are worried that The Grand Agra might not live up to it’s name. 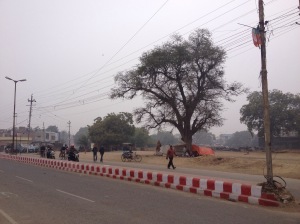 Agra it would seem is home to a larger Muslim population than Jaipur. The night was filled with what I’ve always thought the call to prayer would sound like from an unseen nearby mosque. A wedding was taking place somewhere in the vicinity, the repetitive three rhythms being tapped out on a drum and singing adding to the noise. It seems that India has gotten the better of us by now. While not all necessarily sick, I think most of us are suffering from fatigue. There’s a serious list of things that you can do, places you can visit in Agra. Here we are then, having already decided that seeing the Taj Mahal and a drive by of the Agra Fort will probably do it for us.

The closer we drove to the Taj Mahal the better I expected conditions to be. I would have thought that if nowhere else, money would be spent on keeping the prize of the city in tip-top shape. It seems that the money from tourism doesn’t stick around here for long at all. If someone put me in charge I think that I’d begin by keeping the Taj Mahal in good condition and work my way out, improving appearance, amenities, access to clean water. Instead it seems that whoever is running this show has invested in higher walls, larger gates and bigger guns for armed guards around what I must assume was the finest accommodation options in Agra. Before we had all successfully disembarked the bus we had been swarmed. Like seagulls to chips, men had flocked to the bus offering transport to take us closer, more maps, books and even snow globes. There’s a part of me that wished I knew someone who collected snow globes. I figured we’d just write the lot of them off as was our usual practise and walk seeing as how it was only a kilometer down the road. The next thing I know I’m following everyone in to a rickety trailer attached to the back of a camel. Novel, I suppose but it wasn’t exactly warm out, I’d made the tremendous school boy error of leaving my coat at the hotel, assuming the weather would improve as the day drew on. We bumbled, wobbled, rocked our way, edging ever closer to the main entrance. After what felt like hours had passed, we were at the ticket office. Free water shoes and an extensive discussion about prohibited items, which I would later discover had not been nearly extensive enough were provided. The camel plodded on. I watched a boy running down the road. I thought to myself about where he might be running to. Then I realised, he was chasing us. Up he jumped on the back steps, really putting the camels pace to shame. The driver insisted several times that he got down, the boy couldn’t speak, he smiled and grunted a response, remaining in place causing no trouble whatsoever. A lifetime later, we all dismounted to finally enter the gardens of the Taj Mahal. 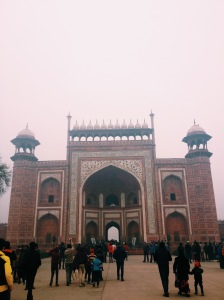 Security was tight, more serious than what we’d experienced at the airport in New Delhi, or perhaps any airport. Body scans, a frisk. Bags were checked both by scanners and by hand as well. I didn’t think I had anything on me that was going to cause a problem. The woman checking my bag pulled out both my pencil case and my journal and advised me that these were prohibited items. I could understand no colouring pens. The Taj Mahal is probably regarded as a big white canvas for some people to scrawl their name “woz ‘ere” on. A notebook though, what on earth was I going to do with that? Tear out all of the pages and scatter them before the wind? Jagdeep informed me that during one of the attempts on Gandhi’s life, a weapon was concealed in a book and it remains a sensitive issue. He then took my banned items and left them with a shopkeeper for later collection, leaving my stress levels only marginally lower. 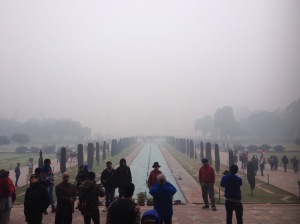 We were finally in, only moments away from viewing one of the modern wonders of the world. As we passed through the threshold of the gateway leading into the main gardens it became immediately apparent that we were going to have to wait just a little longer to see the Taj Mahal. A dense fog that had been in the air all morning still hadn’t budged. I guess it doesn’t help being built on the banks of a river as it was even thicker here. We slowly progressed through the crowds, plants and fountains, it was as we reached the halfway mark that the domed mausoleum and surrounding minarets began to appear. The size alone had me. I lingered, losing everyone, taking each moment to enjoy one of those rare moments when you find yourself in the presence of something that is truly sublime. Of course I had to take the edge off by finding the sweet spot for that perfect Instagram shot. Moving amongst the hundreds of other people all trying to do the same thing I was constantly being tapped on the shoulder with “excuse me mate” or “please move, thanks” following. You know what, I’ve obliged enough requests for photographs on this trip that if I ruin somebody else’s today, so be it. With a little bit of patience, I, at least, had a snap or seven that I was happy with. You know what they say seven photographs make a picture worth sharing via social media. 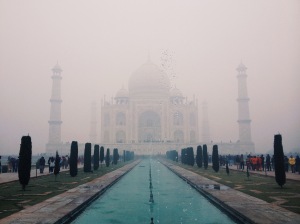 Back to the moment itself, I found that I had some catching up to do as everyone else had already moved ahead, put their shoe covers on to begin the walk in and around the mausoleum itself. I was still caught up with the size of it all. The tourists look tiny. All this for an emperor’s third and favourite wife. It does make you wonder if this kind of extravagance is the cause for many of India’s bigger issues. If the ruling powers of four hundred years ago spent 40 million rupees on a tomb, it doesn’t set much of a precedent. If, instead that money had gone towards irrigation or plumbing then maybe Agra would be a thriving agricultural centre or even something greater. Rather, it is a stagnant, spreading pool of poverty spilling out around an ancient, slowly decaying monument. Yes, alright, it’s quite the romantic gesture but she’s dead and now so is he. How about some though for the future of your empire and it’s people, eh?

Cynical outburst over. The Taj Mahal is majestic. The layers of fog only add to the alluring, mystical charm of the subtle textures of the white marble. It really is hard to believe this is all for one woman. It’s not difficult to see why people flock here for it though. After we’d all had our “wow” moments it must have appeared obvious that we were ready to be bothered. I was walking with Sian as we both continued to take photographs from every conceivable angle when a man stopped me to ask if he and his friends could have a photo with her. Of course, I obliged, calling out to her in the true fashion of a man for a partner “Oi, Sian! These blokes want a photo.” Once you stop for one, that’s it. A never ending wave of people assume that you’ll be happy for a hundred more photographs. Elena copped it pretty bad, as one woman came over, assuming it was photo for just her, Elena said yes. Before she knew it, all her friends had come over too, each wanting both an individual and group photo. We had a brief respite when a group of white girls rocked up in saris. Try hards.

We called it time on the Taj Mahal. Made our way to the gift shop to pick up my things. Thanking the owners for looking after them with the purchase of postcards, and after some discussion on the price, a carved marble elephant with a smaller elephant carved inside it for Elena. Having Jagdeep with us has sure been handy for the souvenir shopping. He says he just asks for the local price and it almost always comes down by close to half. The only other attraction in Agra any of us had even a remote interest was the Agra Fort. As nobody seemed very keen to spend hours getting lost again I’d already agreed that seeing it from the outside was going to be just fine. On seeing the fort I knew I’d made an immediate mistake. The vast red sandstone walls spoke to me of staircases, towers, passages. It was in appearance so vastly different to the Amer Fort. I learned my lesson and immediately began making enquiries into the Red Fort for our final day in New Delhi.

6 responses to “Agra: The Taj Mahal”