The following morning we were supposed to get up and get on with our day, but once you’ve already given yourself one morning off, it’s hard not to get into a habit. We arose slowly before facing our first challenge of the day, navigating the public transport systems of Singapore. When you hear people talk of Singapore, or see it as a tiny dot on a map you don’t think of it being that big. It’s not, but it is a lot bigger than I’d given it credit for. We would have to catch a train and then a bus to the Jurong Bird Park. You can rightly assume that we were both very excited about spending our morning there and be very unsurprised when it turned into the whole day.

I was impressed with the public transport of Singapore, it was both clean and efficient. If you’re asking for more than that, you’re asking for too much. I think next time I’m here I’ll have to figure out the most economic way of buying tickets as we might have just gone with the easy option of buying return tickets on the occasions that we used the services. The trains were easy, but the buses were a little bit confusing. On arrival at the bus stop, all of the signs read like you needed tickets before boarding but there were no ticket machines on hand. It turns out that you can in fact buy tickets on the bus.

We made it out to Jurong without any real difficulty, picked up a couple of leaflets with maps and what time the shows were on and began getting incredibly involved in the first set of aviaries. Owls hid away in darkened rooms, camouflaged in shadow. Seabirds, waders, and pelicans wobbled about a stinking pit of water. I think it was the stench of the birds more than an unpleasant environment, they all seemed pretty happy with their lot. Crested pigeons strutting about the place. This was before we’d reached the Lory Loft. A huge aviary, home to a collection of rosellas and lorikeets. They’re just flying around, doing what they please. You can buy nectar pots to encourage them to come and land on you, it’s supposedly optional but it really isn’t. Who doesn’t want a medium sized tropical bird landing on their shoulder?

They’re crafty birds. I think they know that you want them to land on your head. They sit on the barriers along the walkways and just wait because you’re a soft touch. It’s ok though, so is everybody else. People just walk out with their arms outstretched, giving the birds no incentive whatsoever to be so bold as to come get it for themselves. With a little bit of encouragement, slowly moving the pot away you might be able to encourage a bird or two up on to your hand. Actually, a medium sized tropical bird is a little heavy than you think. Two on the one hand are gonna feel fairly weighty after a short while. 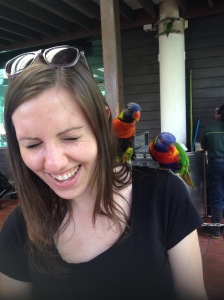 Somewhere in here there’s a joke about a bird in the hand. The other thing that the lorikeets have figured out is that the pots are never quite empty when they go in the bin, and the staff don’t empty the bins quite as regularly as you’d think. Why be bothered by a pesky human when you can fish around in a bin for a few minutes for an easy feed? Clever birds. It wasn’t to end without at least one of us having a bird land on us. Of course, it had to be Elena. Not one, but two rainbow lorikeets landed on her shoulder. Endless, unforgiving jealousy. They got pretty comfortable, clambering down her front, stretching over to her hand to tuck into the dregs of her nectar pot.

After all that excitement we headed back to the main entrance to catch the High Flyers Show. A well orchestrated display of flying technique and natural ability was to ensue. There’s only one way to start something like this and that’s to send the stars of the show out over the audience flying as low as they can. Impressive. Macaws raced one another to take balls out of tree stumps, then demonstrated their agility in the air by flying through increasingly smaller hoops held by a member of the general public. Pied hornbills took off over the crowds flying into a nesting hole. A parrot demonstrated it’s vocal talents, nothing especially vulgar, just the usual hello and goodbye with some mimicry; the ringing of a telephone. The best trick is of course from a sulphur crested cockatoo who flies out to a member of the audience, takes their two dollar bill, flies back to the trainer who promptly placed it in his pocket. Petty theft is funny when it’s happening to somebody else. As a grand finale, all of the birds from the show come back out flying across the audience, waddling over the stage collecting treats that are scattered everywhere.

Taking note of the time, it dawns on us just how long we’ve been at Jurong. We finish off the rest of the park rather quickly in comparison. Another big aviary with another man made waterfall at least as tall as the one in the Cloud Forest. Not half as many birds here, in fact, hardly any at all. Perhaps it’s too hot for them at this time of day. If they’ve got any sense at all they’ll probably be taking shelter up in the canopy somewhere waiting for everything to cool down. It’s then back on the bus, back on the train and back in the city. 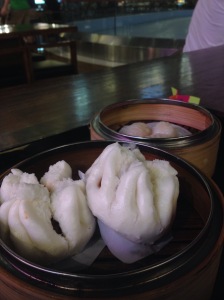 We were meant to meet Bethany and Tegan for a drink in the evening. They’d also tacked on a short break after their time in India. We headed back to Marina Bay Sands catching the bus to save time which backfired. We hit unbelievable traffic at the bridge that crossed over and it took me a long time to figure out that the bar they’d planned to meet us at was on the roof. We had to go up on to that balancing boat thing and all we found was a man who refused our entry because we weren’t wearing the right things. Ugh. Please. Dress codes. I was once refused entry to a bar in Basingstoke of all places because I was wearing white trainers. One day I hope that somebody will explain to me in full detail why my choice in clothing should prevent me from spending my money at a place of business. Never mind. After our struggle, we headed downstairs to get something to eat and came across our next Singapore ritual. BBQ pork buns. Oh my goodness. Why does other food even exist? I don’t know but after this we were on a mission to get more, at every opportunity.