A short morning drive through the agricultural paradise of apple orchards, vineyards, and hop farms delivered us to a campsite in Marahau close to 11am. We had arrived at the gateway to the Abel Tasman National Park. We had good reason to be here early as one of Dad’s friends from home, Jason, was taking us sea kayaking for a couple of days. He wouldn’t arrive until later in the afternoon, so we had some time to do a bit of exploring on our own.

Should we catch a water taxi further into the park? How about walking in and boating back? Or even boating there and walking back? By now everyone was pretty tired of hearing me pipe up to suggest another hike. I wasn’t going to be put off. Mum had done the inland track with me, so I gave her a pass. Lisa was probably just sick of my company by now, did I really want to walk with her for four hours? Probably not. Dad, I don’t know about Dad, maybe he was saving himself for the Tongariro Crossing, I didn’t push it. I agreed to get a boat as far as the Anchorage. Mum, Dad and Lisa were going to walk a short section of the coastal track before catching a water taxi back. I was going to walk back alone. As we finalised the purchase of our tickets an apocalypse of rain struck. It came down in lakes, the roads turned to rivers instantly. A couple waiting with us cancelled almost immediately. A little bit of rain wasn’t going to put us weather hardened Brits off! 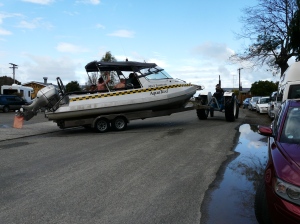 A tractor pulled in with a boat on a trailer behind it. My mind swam in the memories of family holidays from years ago. The fastest boat around the bay, a tractor pulling a loading ramp across a beach, not being put off by the rain. Nothing had changed. The tractor drove us to the shoreline and we were off into the waves. 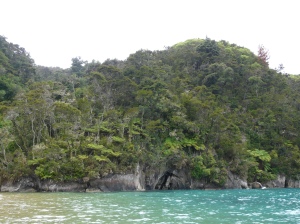 There was one other person braving the weather with us. The skipper praised us all for our can-do attitude, I think he was surprised that we had a choice and still decided to come out and play. We dropped some kayaks off at a beach on route as he made constant jokes about liquid sunshine and enjoying the weather. Usually the skipper advised, the water taxi does a bit of a tour, some nature spotting and the like but because of the less than perfect weather he decided we’d just make a quick stop for some seals and head on to the Anchorage.

We had two options, we could walk to the Pitt Head or Cleopatra’s Pools, both listed as 40 minute returns. Why not both? I decided I’d go to Cleopatra’s Pools and then start off on the coastal track back as I figured this might mean we’d get back at a similar time. As we stepped off the beach the rain had stopped. We rolled up and down through the hills along the coast, occasionally climbing almost vertical mud tracks. It was a good thing the rain didn’t last otherwise it’d have been another river and almost impassable. I don’t know who worked out it was a 40 minute walk there and back or where even that was measured from but it was well over an hour by the time we’d got there.

Through the lush coastal forest we had glimpses of golden beaches and crystal clear waters, had the weather been in our favour I suspect we may have opted to stay in Anchorage and enjoyed the surrounding beaches. We were pleased we’d have a few days in yet another stunning corner of New Zealand’s South Island. We eventually arrived at Cleopatra’s Pools to find glass-like pools, waterfalls and huge boulders. Additional entertainment brought by the Italian gentleman who lunged across the rocks as if he did it everyday before losing his footing and ending waste deep in the water.

I was ready to start my journey back to the campsite on the coastal track. Everything I had seen in brochures, pamphlets, even on the map I had of the route showed happy, young backpackers trekking out across beautiful sandy beaches. The stretch I was hiking contained no such beaches. The walk was almost entirely empty, I felt like I had the whole world to myself. A tiny section of the world at any rate as the scenery was blocked on either side by shrubs, bushes and trees. I began counting my distance travelled based on the rodent traps I passed. I spent 10km with a rock face on one side of me and trees on the other.

There options to turn off the main track for beaches and view points. I opted in for about half, always following the same route there and back. Not long after I expected my family to be boarding their water-taxi back to the Marahau I was out on a rocky point looking across the sea to Adele Island. Three taxi’s raced past, I wondered if they’d see me if I waved. 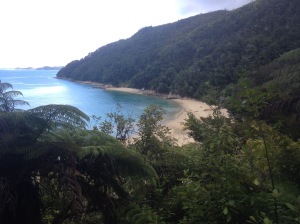 I was getting into my stride, starting to enjoy the track as it twisted in and out of inlets and coves. The clouds began to clear. The sky brightened, the sun emerged. I thought of the couple who had cancelled their trip. They had missed out on a glorious afternoon because they were easily put off by a little rain. I wondered if my family were back, if Jason had arrived, how much further I’d have to walk. My brain betrayed me, starting a game of ‘it’s just around the next corner’. I must have turned one hundred more corners before I accepted I still had at least an hour more walking ahead of me.

I found more accessible beaches close to the end, or at least what I thought was close anyway. The tide was well out, people were riding horses in the damp sand. I considered attempting a sneaky shortcut across the bay, I’m aware of the dangers of a quickly turning tide. I didn’t fancy my chances, I wasn’t keen on getting caught in any potential quick sand out there either. I stuck with the track, it was there for a reason. I found myself on a bridge, pass through a campsite, more bridges crossing the tidal marshes and then I was finally at the visitor centre. Home, if you like, with the exception of the final, longest kilometre back to the campsite.

Jason had arrived, he and Dad were already happily abusing each other when I slumped down into a chair, relieved and exhausted. I took my boots off to find a marble sized blister on my right ankle. I wondered if I’d perhaps overdone the hiking in the last few days? Everyone else had taken regular breaks. It didn’t matter, the next two days would be spent mostly in a sitting position using my arms instead. It would have plenty of time to heal.