In arriving at Jason’s home we approached the end of our planned itinerary. We were looking ahead to things we wanted to do as and when we came to them, the loose plan in place was subject to change. The idea of heading up to the Bay of Islands after passing through Auckland for our final few days was scrapped because it would be a long way to go just to come back again, we’d be better off to save it for next time. Jason had mentioned a bird sanctuary near his home might be worth a visit. You know me well enough by now to anticipate my reaction to those words. I was on board, we all were.

Kapiti island is in full view from Paraparaumu. Widely regarded as one of the most precious nature reserves in New Zealand, Kapiti Island is home to an impressive variety of native bird and plant species. The invasive rats, possums and other mammals have been removed and there are strict restrictions in place to prevent their return. I was surprised to discover the only land mammal native to New Zealand is a bat. Not a single land based predator explains why imported species do so well here, there’s nothing to keep them in check. Thanks to its distance from the mainland, Kapiti is a breeding ground for species of bird which are endangered or at risk of becoming so with the hope of one day reintroducing them to other reserves and national parks on the mainland.

We had an early boat trip across the bay. High winds the night before convinced Jason, and subsequently Lisa and I, our crossing was likely to be cancelled. Lisa and I slept in to be woken up with next to no time to get a day bag packed and ready to go. I raced around trying to get organised and was just about ready to go, apart from water I realised as we pulled out of Jason’s drive way. It might have been a nightmare but I was saved by the advantages of travelling in a group, Mum and Dad had enough to share.

We found the guide for our trip, Jenny, in a car park next to the beach. She instructed us on how to perform a self-check for seeds, insects and rodents in all of our gear before we’re allowed to board the boat. It turns out there’s a local species of ant quite partial to bird, I was quite relieved I didn’t have a colony living in my boots. I wouldn’t have been surprised if those ants weren’t overly fussy on where a feed came from. We gave ourselves the all clear, which made the whole check feel hugely redundant. I don’t think anyone is going to get this far and then call themselves out for carrying a mouse and be prevented from travelling to the island. 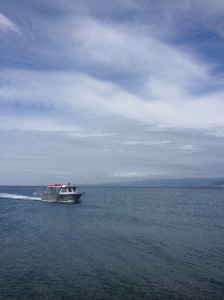 The boat trip is long enough to make it supposedly impossible for stoats and rats to swim to the island. We were on the shores within five minutes and headed straight for the visitor centre for a debrief. Jenny began with what she claimed to be the unique history of the island which seemed to be roughly the same history as all islands. Sea levels rise and fall, tectonic plates shift. I think she meant to say New Zealand is remote and has been for millions of years as there was nothing particularly unique about Kapiti. She then got visibly angry about the Maori discovery, and settlement which lead to the hunting and subsequent extinction of giant ostriches called Moa and the Haast Eagle. If they hadn’t have done it, us white folk wouldn’t have given them a fighting chance either. I wondered how many species European settlers have wiped out since their arrival, it didn’t look like she was quite so upset about those. Jenny completed her bad impression by suggesting Great Britain is home only to sparrows and blackbirds. You can understand how relieved I was to find she was going to let us off on our own to explore, I don’t think I’d have lasted the day had it been otherwise. 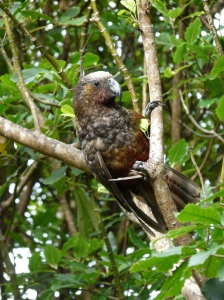 We were free to follow the tracks around the island, keeping a keen eye out for the various birds we might encounter. The five of us opted to trek up to the island’s highest point and come back down again, making a full day of our trip and maximising our chances of winning bird bingo. We hadn’t even left the visitor centre before we could put a big fat tick next to one of the birds. A kaka, another of New Zealand’s parrots. She’s a smart bird, well aware of humans who are stupid enough to leave food lying around in backpacks, intelligent enough to open the zips and steal anything edible looking, including cameras and binoculars. She’s a stunner, coppers, reds and greens shimmer in the morning light. She’s not easily deterred either, sticking with us as we began our hike.

Spotting birds in the lush green forests was a challenging prospect. We could hear them, all around us was the chatter of what could have been hundreds of feathered friends. We caught glimpses of greens, greys and browns as little wings flitted from branch to branch, coming to investigate before hurrying away.

A bird might stay where it was, still for just long enough to be spotted. The fat, pin-headed, fluffy New Zealand pigeon was a prime example. These green giants of the canopy found it easier to remain perched. I suspect it might be quite the ordeal for these guys to take flight They were unmistakable in the air, sounding like throbbing jet engines above.

We met a few wekas on our climb. They were easier to spot, being ground dwellers and, like the kaka, well informed of the likelihood of a free meal from passing tourists. The rough terrain of the uphill track made it occasionally precarious to look into the treetops, it was easy to trip over a tangled root arching across the path while staring into the greenery above.

A flash of white would dart across the path, a fantail maybe. The ever curious North Island robin would come and investigate the noise we made, I think by the time we’d reached the island’s summit we’d seen a serious majority of the birdlife on the island. By now we’d all forgotten a good half of their names and struggled to identify some of the smaller birds. It was unlikely we’d see kiwis as they’re nocturnal and incredibly shy at the best of times but they’re apparently in no short supply on the island. 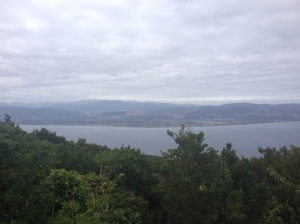 There are a couple of feeders on the island where you can sit and watch some of the small nectar eaters dart from the nearby branches. Stopping is recommended even if all you do is sit in the silence. The reality is anything but, the noises come from every level of the leafy canopy and are a match for the sounds of any bustling city street. I’d never be able to identify all the different voices whistling and chirping, were they warning one another of nearby humans or just chattering away about weekend plans? 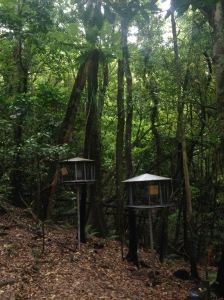 The descent is much easier, a smoother flat trail winds down hill back to the beach for the return trip. We were subject to yet another incredible treat from the ocean. A huge pod of dolphins marched through the passage between Kapiti Island and the beach, playing around the bow of the boat, following us as we twisted and turned between them before deciding enough was enough and continuing on with their own journey. Back on the mainland we returned to Jason’s for the final time. We too had to continue onwards, the Tongariro crossing awaits.