The time has come to start checking items off my list of things to do in Melbourne. Funnily enough most of the things I have left involve beer in some way or another. There are bars to visit, breweries to tour and beers to drink. Dave C and I have a pretty similar list when it comes to what or where to drink. We’ve had a few discussions about some excursions and bar crawls we should do before I leave. Little Creatures is one of the best known craft breweries in Australia. I’m not even sure if they technically qualify as “craft” brewers anymore. Their brewing capacity is an unfathomable 10 million litres a year. That’s a hell of a lot of beer. You’ll be hard pushed to go to any bar and not find a bottle of their pale ale or bright ale in the fridge. I’ll have to do some reading up on the definitions of craft, micro and macro breweries.

Anyway, Dave C and I caught the train out of Melbourne and around the bay to Victoria’s second city, Geelong. When leaving the city it still surprises me how soon you find yourself in the bush. Travelling by train is still one of my favourite things to do. It gives me the luxury of a slow passage. I can stare out the window, across the plains that spread to the You Yang mountains. I could get lost in a book, in my own head, in the scribbled notes of ideas as they come and flow with the passing of trees, farms, and rivers. I had company on this occasion and enjoyed Dave C’s own thoughts on the country as we passed through. 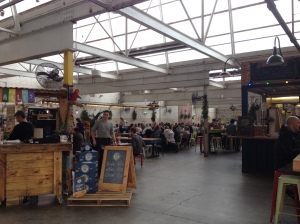 The train takes about an hour to get to Geelong. The Little Creatures brewery is a short walk from South Geelong station. From the station we had a vague idea where we were supposed to go. A towering chimney might have influenced the direction we headed off in. The sun was shining, the sky was blue. It was a perfect Sunday afternoon to have a drink or two. Or six. The chimney didn’t lie to us, it was a perfect guide. Dave C and I were taken back by the size of the operation. It’s less of a surprise now, knowing their production output. We rolled into the canteen, excited for the first drink of the day.

The styling of the brewery was impressive. Little Creatures have incorporated local industry into their decor: a shipping container sand pit, industrial cable reel tables and grape picking containers as planters. With colourful sunshades and strings of coloured lights you’d likely find on the seafront, the brewery and canteen are undeniably hip. The major downside was the little beers came at a big price. It would have been cheaper to head to the Dining Hall in Fitzroy a short walk from home. The food was reasonable and the staff we encountered were charming. Ultimately, the best reason to go direct to the source is for seasonal releases. We were able to enjoy some rarer beverages, working our way through the Fresh Hop Express, Winter Solstice before finishing up with Return of the Dread. It’s warming, chocolate notes were the perfect winter warmer to close on. We had somewhere else to be. 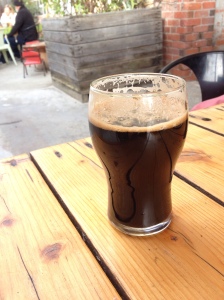 Two Birds brewing had impressed Dave C and I at GABS with their Pina Colada and Taco beer. Their surprisingly accessible location helped them top the list of places to go for a drink. We took the train back to Footscray and changed for Spotswood. It was sort of one the way home. The journey took a significant amount of the edge off from the earlier beers. The small, unimposing location tucked away in Melbourne’s inner-west could have been easy to miss were it not a straight line down the road from the station. There’s nothing more than a four taps bar, a few tables and a seating area inside the brewing warehouse. We sourced a glass of their refreshing Bantam IPA and took a seat opposite the fermenters. 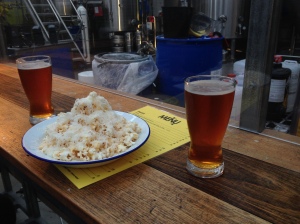 A brief look through the food menu suggested Two Birds were as much about delivering an eye-brow raising snack as they were a beer. We couldn’t look past the chicken parma popcorn. Why would you? It was intriguing. We had to know how they put those flavours into popcorn. It arrived and boy did it deliver. Cheese, tomato, a chicken salt of sorts. Who knows how they did it but it was as good as the Hop Harvest we washed it down with. We had a stroke of luck as we debated one final beer. A new keg was tapped and so began the release of Two Birds’ Red Velvet. What better way to finish the day than with a cake of an amber ale? Cacao and vanilla brought it to life and it was worth leaving the house for. It was then time to call it a day.