The hardest part of doing anything is starting. I had to remember that when I made up my mind to accomplish this, I suspected it might turn out to be physically beyond me. I didn’t think I could do it. Several years ago, I wouldn’t have even tried. On day one the sun was shining and I bore witness to stunning views of Chesil Beach and the Jurassic Coast stretching around Purbeck. My pack was heavy but I was keeping a good pace. The first hill was a steep climb behind Fortuneswell into the quarried cliffs of the island’s body. Once I reached the top, I had to stop and recover. Adrenaline was flushing through me, I felt exhilarated; I’d conquered the first hurdle and it was all down hill from here.

At the very bottom I packed up my gear, loaded my bag for the final time and headed towards the main road. I had over an hour to wait for a bus and decided to walk down into West Lulworth and get on there. The slow, agonising decent helped me accept my decision to  bow out early. When I made it to the train station and it took me five minutes to manage a flight of stairs I was verging on delighted that I’d given up. 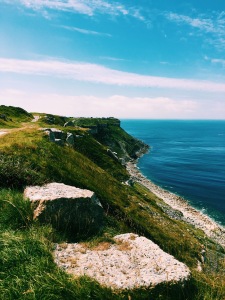 There was no question I was devastated, there’s no joy to be found in quitting. I sat in my Gran’s flat for two days trying to rationalise what had happened and what I would need to do to get back on the path. We walked down to the beach together on my second day of rest to see how I coped. It wasn’t perfect but I seemed to be in working order. I had stopped before I’d done any serious damage, both to my body and my mind. Ignoring the pain, I had been enjoying myself until the end.

I skipped through the songs that got stuck in my head. The chorus of Say My Name by Destiny’s Child, the opening lines of the Teddy Bear’s Picnic played on repeat for a while. Other times it was full songs that I knew most of the words to and wouldn’t be embarrassed to be caught humming along to. During difficult stretches I found myself counting my steps up to 100 and starting again, managing to keep moving forward. I waved at cows and tried to converse with alpacas. Eventually I found myself getting lost in the darker corners of my mind and was relieved to see someone crest a hill and remember I’m in a good place. 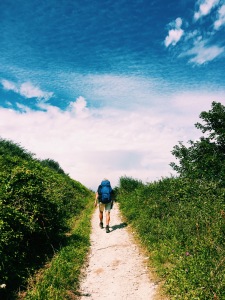 Solitude and loneliness are two shores of the same ocean, a frozen wasteland and a tropical paradise. The path of a traveller is rarely one of loneliness but often taken alone. The hiking trails of South England are dispersed with dog walkers, day trippers, and the occasional adventurer. There is an unusual sense of community among walkers. I don’t know if people feel obligated to acknowledge one another or if it is something else. I have seen you, you have seen me, here we are together in this moment. Good morning, hello, your bag looks much heavier than mine.

A challenge is always a challenge, no matter the size. Lots of people set out not really knowing what they’re doing, what they’re capable of. As has long been the case, most of the learning happens out on the road. Taking the beer was a mistake, unnecessary weight. I passed plenty of pubs and would have no doubt enjoyed the beers better had they been cold. A nice idea but never again. Dried mango pieces are better than either jerky or trail mix. The reservoir that I have long held doubts about was almost as good as my backpack.

The experience tells me I’m not yet strong enough to do what I want. I went back out on the final day to do what should have been my last stretch from Swanage to Shell bay. I left the backpack with my Gran and hoped that I wasn’t making a mistake. I climbed Ballard Down, walked out to Old Harry and walked around Studland Bay to the final marker of the South West Coast Path. My body hadn’t completely given up on me and now I could start to think about what next. This stretch of the trail forms part of the E9 European Long Distance Path running from Estonia to Portugal…just kidding, I’m going back to Lulworth in September to walk the ranges and the stretch of coastline between Kimmeridge and Swansea. I might have fallen in the end, but I’m going to finish what I started.