Following the unexpected success of my coastal hike, the inevitable happened. I stopped. I justified the lack of activity as a well earned break, a break which started to feel like a permanent separation. Having failed last year, I had no choice but to try again. I had to go back. This year I had nothing to do next. No follow up, no future plan. I had to do something, anything to break the routine nothingness. Maybe I could go back, do the next stretch to Exmouth? I could do another warm up in Wales. The next dry weekend I would pack an overnight bag, drive to Snowdonia and climb a mountain. 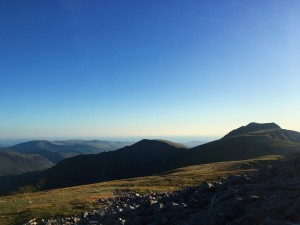 I was somewhere North of Birmingham when I decided I’d had enough. This was too far and I wasn’t even halfway. After my night in the Brecon Beacons I felt that Snowdonia was definitely achievable, even if it was just a little bit hanging off the Southern end of the national park. I was tired before I’d begun. Why had I picked something over nothing when nothing would have been so much easier? Maybe this was a bad idea. When I finally crossed the border my mood started to climb. The hills became bigger, rockier. Mountainous. The road started to ride the valleys like a rollercoaster. Each massive wall of rock I sped towards could have been my destination, until at the last minute the road turned away towards another bigger wall of rock. The time, the distance, they no longer mattered. 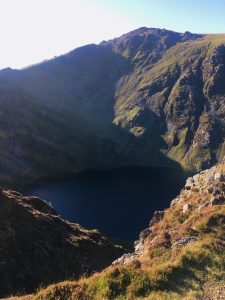 The problem with a map is it doesn’t give you a sense of scale. I’m familiar enough with contour lines but that’s all they are. Closely bunched lines to indicate change. Before people started measuring these things, Cadair Idris was believed to be one of, if not the tallest mountain in Britain. Spoiler; it isn’t, but that doesn’t make it any less impressive. I drove into the carpark at the foot of the Minford Path that would lead me to the summit, found the final space and went to pay. The ticket machine wanted cash, exact change only. The tenner that I definitely thought was in my wallet was too much and definitely not in my wallet. I’d forgotten I’d spent in the previous weekend in a pub which had supposedly been struck by lightening rendering the card machines useless. I thought about dodging the fee, just throwing my bag on my back and getting on with it. My guilty conscience kicked in before I’d done anything wrong. I walked over to the visitor centre to see if they had a cash machine, nothing. On my way back I checked the dashboards of several other vehicles, paying particular attention to the oversized European camper vans hoping to see other chancers. Tickets on everything. 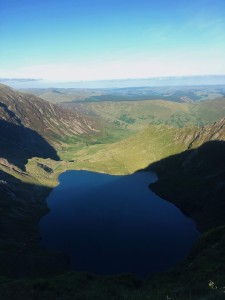 I drove through two villages that had no right to go on existing in the middle of nowhere and eventually the small town of Dollegau before I found somewhere I could retrieve money from a wall. I’d lost more time and the mountain was looking bigger and darker. I put my pack on and it felt heavier than it had ever felt before. I’d been looking for excuses since Birmingham and I found one on the other side of the visitor centre; a campsite. I gave my fresh ten pound note to the owner, threw up my tent, filled up my water bottle and hit the trail. I shouldn’t be surprised to find that starting is still difficult. The steps up through the supposedly 6000 year old oaks were spaced out for people slightly taller than me. Each one slightly further away than I could comfortably reach. I was sweating the recently applied sun cream straight into my eyes. This was good, I was struggling already and I didn’t have anything on my back. I’d made the right choice. I also found that I was going against the flow of traffic, people cruising down hill. There was a chance I might have the summit to myself. 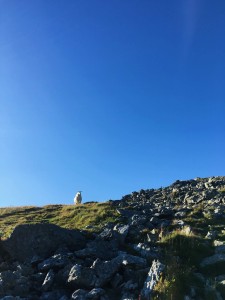 I left the forest, finding my pace and ahead of me the image of what could have been. A man loaded up, poles in each hand making slow progress up the mountain path. I felt the pang of regret, doubting my doubts. I could have at least tried. We chatted as I passed, he hoped to make the summit for sunset and spend the night. I enjoyed the feeling of weightlessness. Movement was easier, I had more energy, more time to explore. I moved off the path to climb a boulder and look down the valley. I peered down vast crags tearing through the rock and offering views of the lake below. Away from the mountain the sun left a strip of gold on Cardigan Bay. The rugged coast held the sea in outstretched arms. It looked like all of Wales spread out beneath me. I let go of fatigue, of doubt, and smiled back at the rolling valleys and angular mountains. 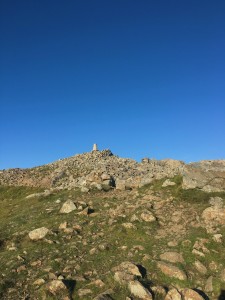 Sheep lived in the heights, nimbly leaping across the scree with ease. Almost every step I took sent a shower of rocks and pebbles closer to the valley floor. The animals seemed bolder up here, one stared me down and I wondered exactly how much trouble I might be in before it eventually launched across a near vertical slope. It wasn’t the final corner, I was only approaching the half way point but as I rounded it I could see the concrete pillar marking the summit. A group of walkers carrying sleeping bags, tents, carrier bags and water bottles came down over the rocks towards me. Perfect timing. I let them pass, savouring the almost at the top views across Snowdonia that rolled on forever. I climbed up to the trig point and gave it a solid high-five. Made it, halfway anyway. Down on the plateau just beyond the shelter a little green tent sat facing the sun. Could I have done it with everything? 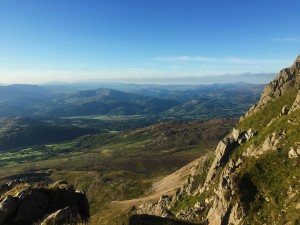 I spoke briefly to the owner, without trying to hide my jealousy at their pitch for the night. The fall and rise of the sun will be spectacular from up here and I’ll miss them both. She told me it took six hours to make the ascent. Checking the time I realise I’ve done it in two. Another four and I’d have been facing some of the tougher stretches in the dark. Is there a word for a cocktail of equal parts disappointment and relief? I had a long gentle slope across the mountain’s back before following a fence line back to the forest and my pitch for the night. Another two hours later as the mountains stole the last of the light, I was crawling into my tent for the night. 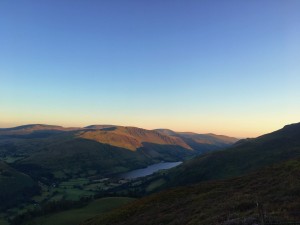 I’d answered one of the questions that’s been plaguing me for the best part of a year. How far is too far to drive and then to walk in a day? Mid-Wales was too far. South Wales is far enough. I’d also climbed a mountain, my first since Mount Tongariro several life times ago. It would have been all too easy to view this adventure as a failure, I’d not carried any weight, I hadn’t got the wild camp I came here for. On the other hand, I’d arrived, gone up and down again and I could get home again without the worry of a parking fine. Nothing is ever perfect, but somethings can be pretty good.