I always think that I live quite frugally, saving where I can in order to spend more on the things that I enjoy the most but recently I’ve been exposed to some frugal extremism.

Some of the backpackers I’m staying with in Curlwaa live from job to job, sometimes they have a lot of money, sometimes they have nothing. Regardless of their financial situation, they make frequent late night trips to the supermarket. This isn’t in order to cash in on some last minute discounts, oh no, this is for some really full on bargain hunting. 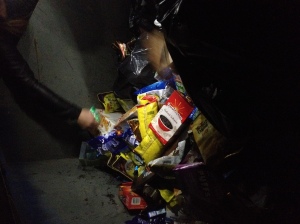 I’d heard rumours before of backpackers dumpster diving for bread and other baked goods. It even got to a point where it wasn’t uncommon to hear people asking if another got their bread for free. What I didn’t hear was about the vast amount of food available if you were willing to break social norms. 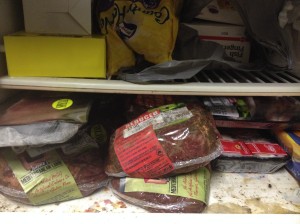 The first time I witnessed a trash haul I couldn’t believe what I was seeing. $100 worth of meat. A fridge shelf full of cheese. I don’t even know the quantity of Pepsi that came out of the van. In many ways I was shocked; the quantity of food simply thrown away at the end of the day, the ease in which this food could be obtained free of charge and, that under the right circumstances, people will have absolutely no problem whatsoever in eating food from a bin. 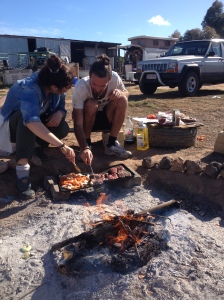 I don’t know the legality of this, I’m going to assume that if you got caught rooting through somebody’s bin you’d likely be arrested, especially if said bin belongs to a faceless corporation. I’m pretty sure the food these guys found could give the homeless in Melbourne hot dinners for at least one day if not more. It strikes a bad note with me that so much food can simply go to waste because a company can’t make a tidy profit on it. How long will it be, I wonder, until supermarkets are donating their usable waste to food banks, homeless shelters, and other places that can help others.