Way back when this all began, Yves, Bastien, Hans and myself were picking Valencia oranges. Up here in Curlwaa this variety is generally used for juicing. I remember one morning Bastien wasn’t around and it was later revealed to me that because he was up early and the juice factory were short staffed, he’d been roped in for a day’s work. Lucky him. I never really considered having a look around, until Mick asked if I’d be interested to see it. Seeing as how I’m up here doing the picking, I thought it might be interesting to see what happens to some of the oranges I’ve removed from trees. 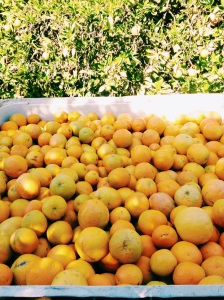 The juicer is in what is essentially the village centre. There’s not much in Curlwaa a previously discussed, there’s a scout hut, the abandoned cash store and a couple of houses. It’s not as big as I was expecting, but then I’ve never really thought about how big an operation juicing is.

When we arrived at the factory, the first thing that happens is the cleaning and sterilisation of the machinery. My understanding is that juicing is a two day process. Day one is getting the place ready and pressing the oranges, day two is bottling the juice so it’s good to hit the shelves. Most of the cleaning process is automated, Mick just had to add water and the cleaning product and then we waited whilst the system washed itself out. Everything gets cooked at around 80 degrees for half an hour to make sure that any bugs that were in there, aren’t still in there when the juice starts flowing. 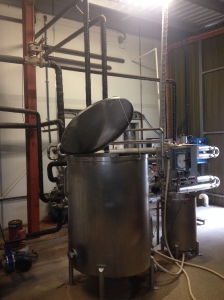 As the cleaning came to an end, Mick began loading to the oranges. He told me that sometimes you’ll get a bin and a picker might have left a drinks bottle, a glove or a hat on top of it and it can be a minor headache when that gets pulled through the machine. Here I am hoping that none of us left anything in our bins!

I was strangely excited to see the juicing start. Watching the oranges tumble onto the conveyor and begin the next step of their journey towards local fridges was quite appealing. There’s a handy poster up in the office which explains what happens inside the FMC (the machine that does the juicing) as you can’t see inside it when it’s draining the good stuff out of the fruit. 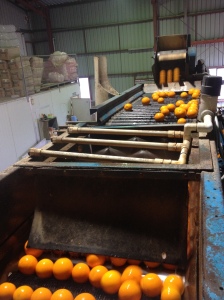 Once everything got going I had a good look around. I followed the oranges from the bins as Mick dumped them into the hopper, they’re then carried up to where they’re washed before they queue up waiting to have their insides punched out.

The juice is then pumped through to be pasturised and the remains are dropped into a truck out the back. Just after things got going, Mick passed me a glass with what I have no doubt about was the freshest orange juice I’m ever likely to have inside. Delicious. He’s also told me that sometimes they do runs of grapefruit and I have to admit I’m a little disappointed they’ve not done any this season. I’m a big fan of the ol’ grapefruit juice. 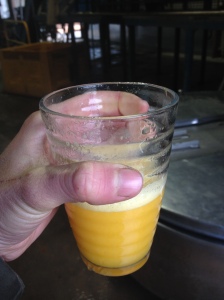 I was actually surprised by how simple the entire process was. At the end of the day it’s just an industrial scale juicer which, yes I know, sounds fairly obvious. With the exception of size, it’s no different to walking into any self-respecting freshly squeezed orange juice serving cafe in town.

The following day I returned to the juicer to see the end of the process. The bottling of the juice ready for transport. I’d seen the conveyor belt the previous day, empty and unused so I knew roughly what would be happening. The bottles are loaded through and printed with labels and dates. They’re then filled with juice before the caps are put on. Then as they come to the end, the bottles are boxed up and sealed and went through to be loaded onto the truck.

I’m still not sure what I’m most surprised about; the small size of the operation or that there is still a lot of work done manually. On the one hand I had expected a huge operation and tanks of orange juice waiting to be transferred into bottles and on the other I was expecting a mostly automated system. I assumes the bottles would go along the conveyor belt and that machines would do everything from there. As it happens the bottles are helped through by hand, the labels and the filling is done by the machine, the caps are attached by hand and they’re boxed up manually at the end. 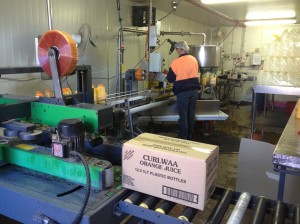 Different sized bottle and three types of juice means that when things aren’t running smoothly, the bottles, caps, labels and boxes all need changing up and the machinery requires a little tinkering to make sure juice fills bottles and boxes are taped up correctly.

I guess this is because it’s not a huge operation, at present the juicing is only really done once a week. The whole run, or at least what I saw of it anyway, mostly operated with four people. From what Karen and Mick have told me though, the place has been taken over by a very reputable Australian beverage company and they’re looking to shift the juicing to another premises and no doubt increase production which I suppose means the possibility of a more automated system and almost certainly a larger operation.

It was definitely one of the more interesting sides of fruit picking. Seeing what happens, and having a better understanding of the end process has made me feel that, in a certain sense, I’ve seen my job through from start to finish. The fruit has come off the trees, been processed in the factory and enjoyed with an egg and cheese muffin in the morning for breakfast.