Life goes on, as you’d expect. Things are ticking over, the season is in full swing and I’ve been out in the fields picking every day. I had a full week picking oranges alone and by the end I was feeling a lot more confident in my abilities as a picker. One of the doubts that I did have were always about the other pickers in the field; they must be picking so much faster than me, I’m going too slow, they’ll be in my row before I’ve filled this bin. Turns out that I actually had one day out there where I was the fastest picker. Mick told me that on one of the days when I managed to pick three bins, none of the other crews picked the equivalent. That was a really great to hear, maybe I’m not so bad at this after all.

After a week with the oranges, Mick had to come and give my tent a shake one morning to see if I was interested in picking some mandarins. After the problems in Hazeldell I’ve actually been pretty keen to get out there and prove that I can successfully pick mandarins. Off we went and Garry dropped me off just up the road and I met some backpackers who were staying in Wentworth, apparently there’s a hostel there; who knew? It was refreshing to pick as part of a crew again and I made sure that my new team were leaving nothing undesirable on the mandarins in order to ensure there were no further problems. I’ve been picking with them for the best part of a week now and I’m actually quite delighted to find myself in the company of some Brits.

What I actually want to talk about today though are some of the little things that make living in the countryside worthwhile. I’ve come to realize that I take quite a lot of things for granted, far too much in fact and I hope that my time here will help me to keep sight of that which is important. I think that if you’ve been keeping up with my Instagram account then some of what follows may not surprise you!

When I first arrived in Curlwaa it was the sunsets that caught me first. Magnificent colours climbed across the sky as night approached and the last light of the sun painted beautiful pinks over the lingering clouds. I remember walking down the drive to watch the show on one of our first nights here and I’ve enjoyed it as often as possible. I know that when the others were still with me I’d catch myself drifting away from conversation to simply enjoy the sky. I have little doubt that the fifteen minutes either side of sunset are better than much of what I could find on T.V. for the same amount of time. It took me a little longer to come to appreciate the sunrises; it’s not so easy to convince myself out of bed at seven thirty. There was a period where I was up every day and ready for the show to start the day, more recently I’ve been sleeping in way past the break of dawn but since I’ve been back on the mandarins I’ve made a solid effort to get up in time to catch the sun come up. 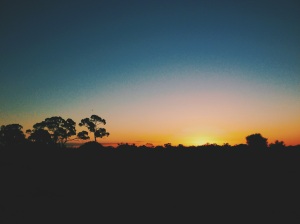 Not only have they simply been enjoyable to witness but I also believe that these are perhaps the best I’ve ever seen and I think I can safely say the same for other naturally occurring events. The night sky for example, on a clear cloudless, moonless evening is exquisite. I have lost my mind on many nights starring up at the stars. I actually remember my Dad and my Aunt lying down in the middle of the road somewhere in the bush up in Queensland many years ago to appreciate the beauty of our galaxy. Sadly I don’t remember the view from there but fortunately I now have unforgettable memories of the stars. I’ve also been surprised by the number of rainbows I’ve seen while I’ve been out here; I mean, I don’t think it has rained particularly often. I feel like I can count the days on one hand, but every time it has there have been some of the most vivid and far reaching rainbows I have ever seen. Plenty of those much famed double rainbows as well!

Mother Nature has been nothing but kind to me and I feel that this has only increased since the number of people I’ve been camping with has reduced. My mornings are heralded in with the dawn chorus. Kookaburra’s laughing in the distance, a cackled incredibly distinctive and not dissimilar to the chatter of monkeys. I’ve no idea who many of the other calls belong to but it’s so different to that at home. Willy wagtails will come and hop around the site, flicking their tails this way and that before darting off into the distance. Crested pigeons whistle through the air, hammering away on the shed roof if they choose to land. The highlight though are the kangaroos. I don’t know if I’m always seeing the same few of there are heaps in the area. More times than I can remember I’ve looked up, walked around a corner or crossed a road and been just as surprised as the ‘roo staring at me.

Nature’s been nothing but kind to me. Sure I’ve had some rain and there’s always the fear that my tent will blow away when the wind picks up or, worse collapse on me!

One response to “Curlwaa: The Simple Things”