As I enter the last few days of my regional experience I’ve found myself considering how I feel. I wasn’t feeling much of anything, but a mix of everything; excited, relieved, sad, nervous were all passing through. It’s simple things, like I’ve talked about before, that I know I’m going to miss. Waking up to the dawn chorus of birds.The willy wagtail dancing provocatively across the ground. The whistling of the crested pigeon as it comes to land on the make-do washing line. The serene mornings as the sun comes up over the frosted fields while kangaroos graze on whatever it is that kangaroos have found out there to graze on.

I’ve learned a lot from being here, at least I feel like I have. I can’t exactly tell you what it is though. You know how it is, you get to the end of the children’s movie and there was something you were supposed to take away from it. If only you hadn’t have got caught up in the bright colours and the cheery chorus. Those bright colours have been citrus orange, leaf green and sky blue. That’s what I’d like to think I’ll remember the most, the days when it was truly beautiful to be at work. That cheery chorus? The tumbling, bouncing sound of a full bag of oranges hitting the bottom of an empty bin. The waft of citrus that lingers in your nose when you tear the first fruit from a tree. The sight of a trailer loaded with full bins of oranges at the end of the day. Sitrus Supply. Always remains the property of. Printed in blue on the side of the bin. I could fill one of those on my own in just over an hour and a half. Those were the best days, the days I’d think to myself “we’re really flying through it now.” Then my head would be somewhere else, thinking over past scenarios. How could I have done it better? Then anticipated future events. How will I handle this? Then I’d be back in the moment. Counting the number of bags I’d emptied so far. Apparently it takes 28 1 1/2 case bags to fill a bin. I’ve done it in 20. Quickest bin I’ve filled. I wonder if someone will be along shortly to move my trailer on. Another bag and then we’ll see what’s going on. 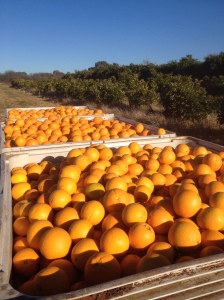 Going home at the end of the day. Rushing through the shower, getting the fire on before it get’s dark. Garry’s dog, Spot, wagging her tail with glee, running in front of me and lying down in a desperate attempt to get a belly rub before I find something more constructive to do. Beatrice the cat strutting over to the fire and finding a way, no matter what, to get up on my lap to take a nap. The slow roar of the fire as it eats away the citrus roots I spent the morning collecting for the sole purpose of keeping warm in the evening. Fire baked potatoes with their crisp, often charred skins and the soft, fluffy insides that are almost as good as your Mum’s best roasties. Leaning back in my chair, head folding over the top and just looking at the stars. Realizing that this it the edge of the galaxy and I am looking right at it. I’m yet to do it and not blow my own mind into millions of tiny little star sized pieces. 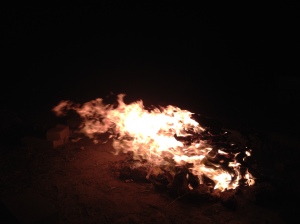 I’m excited to return to civilization. I’ve enjoyed living in a tent for three months but there are some things that I’ve finally had enough of. The times when I’ve tossed and turned at night. It’s 5am and I’m awake. Why am I awake? I don’t need the toilet, which is a relief. My feet are cold, so cold in fact that I’m not sure that I still have toes. This is madness. I check my phone for some idea of the temperature and discover it’s likely to be around -1 degrees outside, little warmer under the canvas. I pull my hat further down my head and tuck it in to the hood of my sleeping bag and hope that if I wiggle my toes enough my feet will be warm enough to allow me to sleep for another couple of hours. A warm, real bed that lives between four solid walls, under a weather proof roof is high on the list of things that I’m looking forward to.

I’ve been sad because, for the last three months, this has been home. I’ve crawled into my tent at night knowing that it is my small, smelly, sometimes uncomfortable space in the world. It definitely isn’t much but it is mine. Through the good and the bad, my tent has always been there. I’ve been worried in the few spells of bad weather, but it’s held strong. One lazy morning I actually took note of the safety instructions and had a read. This tent is not a permanent dwelling. I’m not so sure about that. It’ll be difficult to pack it up and put it in the top of a cupboard for the foreseeable future. The people who have been here consistently, Garry, Mick, Karen and the kids have become my world. These are the people who I work with, I talk to, I eat with, I drink with on a day-to-day basis. In many ways Garry has been like a house mate, perhaps one of the best I’ve had since I’ve been in Australia. It will be hard to say goodbye.

I’m relieved because there was a time when I didn’t think I’d complete the required days. I may have got to the beginning of September and had to leave without an option to return. That would have left me hugely disappointed with myself. Fortunately, things have worked out and it won’t be too long until I have my second year visa granted. I also know I’ll never have to pull a picking bag over my still aching shoulders ever again. I won’t have to squat down to pick those measly few oranges at the bottom of that tree. I won’t be reaching out for an orange at the top of the ladder and feel my whole world crash through the branches until I’m stuck in the middle of the tree. That’s not to say I haven’t enjoyed my picking experience, it’s just that it’s not something I could enjoy doing any more!

I’m nervous because I’m going home. That sounds strange, huh? I’ve been away for a long time. Things might have changed; they definitely won’t have. I’ve been away for this long before and I know that nothing changes. I’m going to have to secure a place to live, a new job and readjust to city life. Here, I’ve become comfortable with rough country living. I know it, I have an, albeit basic and limited, understanding of it. I feel like a part of me will miss this. There’s a little boy who used to own a toy farm and this is probably the closest I’ll ever get to the real thing. Living and working outdoors in the fresh air has been, well, a breath of fresh air. Sure, it’s been cold, at times wet but for the most part it I’ve had one of the best winters I’m ever likely to. Trips into Mildura have left me awed after long absences, the bright lights, all of the people. It’s been quite astounding how quickly you can adjust to living in a field. How am I going to cope with the people, the traffic, the rules of a city as big as Melbourne?