Goodbye to 2014. Almost a month in to the New Year, I can hear you thinking “where has this guy been?”. I get it, new year, new start, you probably expected me to be flying out of the blocks with plenty of ambition. Sorry to disappoint. Actually, I’m not sorry. This year I started off with a different approach. I had been toying with the idea of taking up a paper-based journal again. Something I tried the first time out in Europe but hadn’t the motivation to stick with. A shorter trip with more time to burn gave me a strong opportunity to get it right. Guess what, that means good news for you! This is going to be at the very least a second draft, which means fewer mistakes and maybe, just maybe a better read! Or it won’t. You know how it is.

It wasn’t meant to be. Elena’s best friend Tamsin and her partner Jagdeep were getting married. They had been throwing dates around in February or March to go back to his native India for the big day. I’d kept saying that I’d love to go. I knew I couldn’t, I already had other commitments. New Zealand is booked. There was no way I could do both. Then, everything changed. We didn’t know it then, but this would become a running theme of our Indian wedding. January. The 5th of January. I was free. I was available. I could go. India wasn’t on my list. I’m not the kind of person who is going to turn their nose up at an opportunity. I was halfway through a six month temporary contract when I decided I’d take a gamble. I asked for three weeks off in the final two months of my employment. A bold move. One that paid off. Two days later I was approved for leave. I was going to India. 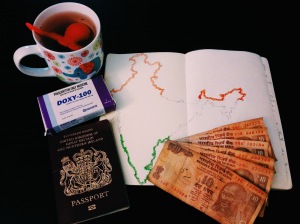 Our planning was less than perfect. Much closer to abysmal in we’re being completely honest. Elena and I had known for a couple of months that we’d need flights, immunisations and visas. Of all three, the only thing we did in good time was visit the doctor to get our injections. We booked our flights a week before we were due to arrive. The worst thing for us both was that we left our visas far too late. I spent months processing Indian visa applications so I knew how long they could take, still we left it until Christmas. Public holidays everywhere, five business days in a row weren’t going to be seen for weeks. It was touch and go for a while there. We did, however get those sweet, sweet tourist visas through in time. We were going to India.

21:00. The 2nd of January. Melbourne Airport. Three hours before our flight. It’s never taken me more than an hour to check in and pass through customs. One day I’m going to rock up late I swear it. The airport still remains to be as a fascinating place. The perfect people watching ground. Everyone just killing time. A cup of tea here, a bite to eat there. Sitting. Waiting. Everyone finding their own way to waste away the hours before they’re free to leave. A baby grand piano sits before us, sticky keys and out of tune. Elena stretches her fingers, takes a seat, taps out a tune for both herself and her fellow passengers.

Another lady took over the keys, the notes float through the terminal. Soon she leaves, perhaps for good. Who knows where her flight will take her. Elena returns to the stool for one more song. This time, she receives a ripple of applause from a woman who thanks her for a beautiful rendition of her favourite song. She herself, approaches the piano, just to look, to see it for herself. She returns to us with two rings, assuming Elena has left them there. They belong to somebody else. Perhaps the other woman. I deliver them to the nearest duty free store, wondering if she will ever see them again. At last, it was our turn to leave.

Flying remains to me one of the pinnacles of human achievement. Even with the last year filled with tragedy, people are not deterred. Our flight looked full of all ages. Walking down one of the aisles towards the bathroom, taking a leak into a steel bowl 30,000 feet above sea level, travelling at 500 miles per hour like it’s a perfectly normal event. I had an easy flight, sleeping for almost five hours. Having spent a serious amount of time on various forms of public transport, I’ve become pretty good at falling asleep. Elena wasn’t so lucky, she suffered from what we at first thought was a heavy bout of motion sickness but would later discover to be one of the many unpleasant side effects of our anti-malarial tablets. Seven hours later we were in Singapore. Our transfer to journey onward to Delhi is smooth. A short flight of a few movies later and we had arrived.

India. A country with a reputation like Marmite. To some it’s incredible, beautiful, a place of magic and wonder. To others it’s challenging, over-whelming, confronting. We had arrived. We had arrival forms, customs forms, and I was filled with this feeling. The same one, I had it a few times before. Leaving the UK for Belgium, arriving in Miami. There is, beyond those automatic doors, a wealth of experience just waiting to be embraced. Sounds good, right? The same feeling is comprised of the fear of the unknown which can lead all too easily to inaction. Something has to be done.