After the weeks of build up, preparation, meticulous planning, decorating, all followed up with a mild attack of anxiety it’s all over for another year. I’m about ready to box up the decorations, safe in the knowledge that it will be another twelve months before I have to hear another Christmas song. Be that as it may, as much as I’d like to put it all away, I can’t, not until the New Year, it just wouldn’t be right, would it? During the final approach I thought I was well organized, yet now here we are at the end of it all with acres of space for improvement. The slow, steady, continuous, year-long beginning on 26th of December purchasing that I’ve secretly admired my sister for over the last few years is emerging as the method for the future. Elena and I have already started a list for Christmas 2015, let’s leave next year for next year though. Here’s a look at our successes for 2014!

Christmas it self was more than up to the hype that had preceded it. It wasn’t anything extraordinary, nothing unexpected happened, that shouldn’t be taken as any form of offence either. It was everything that I could have wanted from a family Christmas away from my family. We began on Christmas Eve, packing the car with boxes and boxes of gifts, overnight bags, along with anything else we thought we might need before heading over to Elena’s parents house for dinner. Things were to take a turn for the worse as we called it a night. Of the two of us, I’m the one that has the reputation for sleep talking. Just a few nights ago I reportedly asked Elena “Can I give you a call later on today, would that be a better time for you?”, it sounds to me like an overtime claim needs to be submitted when I go back to work. Elena went one better on Christmas Eve though. She rolled over, it must have been close to 1am. We hadn’t been in bed for very long but just long enough to feel like you’ve had a good sleep even if has only been a couple of hours. She was still fast asleep. She sighed, mumbling, then perfectly audible “This will be the worst Christmas ever.” Wow. Nothing like lying awake all Christmas Eve wondering what it is that you could have possibly done, or will do, or won’t do that will ruin the day. Fortunately, I think things turned out to be alright in the end.

Awake early filled with excitement Elena and I began with our gifts to each other, both agreeing that we’d done an excellent job both on the gift front and on spending far too much money. As the rest of her family awoke we moved in the living room to spread the rest of the gifts. A smart idea for a large family is to do a Kris Kringle, or a Secret Santa as some of you may know it, and Elena has a big family. I was the receiver of a most excellent gift. I am now the proud owner of an indoor/outdoor George Foreman BBQ grill thanks to Elena’s Aunty Luise. Summer is here, we have a balcony, the small grill is perfect for us and we’ve already enjoyed an al fresco breakfast and dinner. 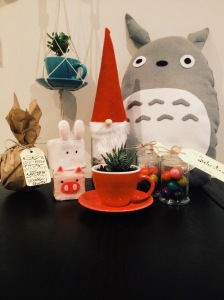 Elena flexed her creative muscles in a big way when it came to gift giving. That’s a Totoro pillow you’re feasting your eyes on at the back there. Elf hats for bottles of wine, beer and cans of soft drink. I suspect you may find those little animal cubes a little familiar. There’s some fancy gift wrap and hand written labels, I’d say my family at home who were surprised to find that I hadn’t lied, their gifts were wrapped, probably have Elena’s enthusiasm for Christmas to thank. It was very difficult not to get on board with the amount of effort she puts in. Succulents in tea cups with knotted string hanging planters. There’s a lot of time and love that gets thrown in to her gift-giving, I too turned out to be a beneficiary of some home made felt social-media themed coasters. 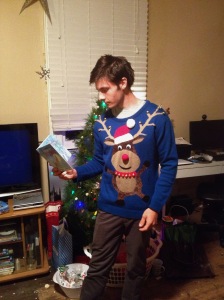 I went down another avenue for my gifts this year. Elena’s brother James had made a comment months ago about Christmas jumpers. I’m not sure if he completely regretted it once he’d unwrapped the absolute get of a piece that my Mum found at home while she was out doing the rounds on my behalf. I have to give a lot of credit to him, I insisted that he wore it all day on Christmas and he put in a solid shift. There were a lot of questionable comments around the dinner table, the combination of James’ straight face, my monotonous sarcastic tone of voice left a lot of people feeling rather concerned that we thought it was in fact a very nice jumper, which obviously it is. It wasn’t all bad news though as another two more appropriate festive jumpers followed, one that he can even get away with wearing when it is actually cold in Australia.

The rest of the day was spent over at Elena’s uncle’s place eating vast quantities of almost every kind of food you can imagine. I’ve come to learn that as an Italian family, eating is a very serious business; a plate of pasta is a standard entree before then enjoying a buffet of anything you fancy. Three plates later and I thought I was done, there was certainly no room for anything else. Of course, then came the deserts. The Christmas pudding can take a seat somewhere to the back. The traditional Christmas finale here in Australia is pavlova. I’m an immediate convert to this way of finishing off the meal. Obviously this wasn’t all, vanilla slices, rum balls, cake. I don’t think I’d eaten so much since the year that my aunt accidentally let my cousin and I assume the full plate of profiteroles that she bough upstairs for us were just for us. I’ve certainly toughened up since then though, while in need of a good lie down there were no adverse effects of eating so much this year.

There was no chance of a white Christmas this year, although with Melbourne’s reputation there’s always the risk of a heavy hail storm at any time, so maybe a slim chance, but Elena and I still managed to build more snowmen than most thanks to a hilarious gift received multiple times.Phone calls from home, a Facetime from the lads at the pub and a Skype date with the whole family on Christmas day made sure that I saw most people at home, wishing all those available at the time a Merry Christmas and enjoying a couple of long over due catch ups. Once again it’s been a different Christmas for me but still a traditional one filled with the kindness, care and good humour of those whose lives have collided with mine.