The Dandenong Ranges are a wilderness visible from the city. Often nothing more than a dark shadow on the Eastern horizon. The drive out to the foot of the mountains is less than an hour. Melbourne is surrounded by destinations to escape from the city’s bustling atmosphere. The sky was thick with clouds, an ever-present threat of rain hung over us. The hills rose up, covered with a dense forest. The canopy was an orchestra of bird caws and cries. The scent of gum and eucalyptus filled the air. A smell that will forever remind me of this part of the world.

Two crimson rosellas pick at the burned remains of a barbecue. In a tree beyond them, a plump kookaburra keeps watch. The white bird swooped down from it’s branch to pluck a worm out of the moist ground. As we approached the start of the track a most awful sound began to crescendo. A platoon of cockatoos soared overhead, a thunderous interruption to the serenity. The Dandenong Ranges are famous as being home to lyrebirds. The ground dwelling bird is renowned for it’s ability to mimic the sounds around it. I’m disappointed we didn’t see any. With the amount of noise around us I wouldn’t be surprised if some of the stranger sounds were from a lyrebird.

The 1000 Steps are a memorial to the Australian soldiers who fought on the Kokoda track in Papua New Guinea in World War II. There are a few options to consider when tackling the walk. Did we take the memorial track, the fitness track or the steep, winding path that weaved up the mountain side? We wanted to do the actual 1000 steps, marked with plaques describing the acts of war. Our ascent was slow to begin with, we followed a dirt track alongside a babbling stream. The path rose and fell along the contours of one hill as another came to meet it from across the creek. There were not steps in sight. We had seen steps at the beginning of the fitness trail. I wondered if the sign was bent and we’d been misguided.

The thick, eroded, wet and muddy slabs of concrete appeared. The 1000 steps. The track was wide enough for one person to walk in relative comfort. We began, one foot rising and falling in front of the other. More eager, fitter, less mentally-stable visitors came running up the steps behind us. We often had to wait for a brief plateau to allow them to pass, watching them race on ahead. My breath condensed before my face but I was still regretting the number of layers I’d chosen. My t-shirt, damp with sweat had begun to cling to my torso.

Elena counted the steps. Stopping every couple of hundred to turn around and inform me of the latest count. It was like watching a clock at work, the more often you know the time, the slower it passes, the longer the climb took. There were 783 steps in total. The summit didn’t appear to be the end of the track. A path continued up, around one more corner.

A schoolboy ran on ahead. He’d thought the same as us. He returned before we’d decided to finish the climb. “There’s nothing,” he said, “there’s just a carpark.” Of course, I didn’t take his word for it. I had to know for myself there wasn’t a spectacular lookout, and Elena needed to find another 217 steps. We climbed, the mountain flattened. We came to a road and a couple of country houses. I couldn’t imagine the journey into town when the people who lived there had ran out of milk. I wanted to push on, just in case, maybe there might have been more than just a car park. 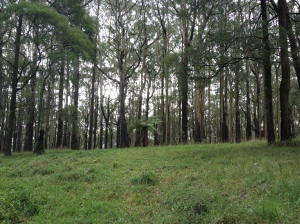 The trees were a 20 metre tall green screen, blocking the spectacular views from the mountain. I’d caught glimpses of the towns, roads and fields between the trunks on the way up. From the canopy there was no doubt a phenomenal view back towards Melbourne. We were 217 steps short of a thousand and had nowhere else to climb. I had to concede defeat, there was nothing left for us to do but descend.

Having come up the 783 steps and watched people struggling down, I decided we would be best to take a different route down. I opted for the Belview Terrace, which was meant to be a stroll through open shrubbery and grassy dry forest. Elena thought it more of a service road to the car park. The steep, twisting path spat us out at the bottom end of the car park we’d arrived in. Another kookaburra watched from a nearby tree.

We made it into the café with half an hour before closing, no doubt to the annoyance of the staff. Having gone on a wet, miserable weekday we’d missed the crowds. On a weekend the climb is more like a queue. 1000 people trying to count the 783 steps to the summit. We climbed back into the car and made the short journey back to our urban life.

One response to “Melbourne Attractions: 1000 Steps”