People always talk about how wonderful the autumn is with its pumpkin spice, lattes and pies. For me it represents a more literal fall. The aroma of decomposing conker shells, the wild fermentation of rotting blackberries, the slow collapse of wet leaves into mud. The death of summer. The end of plans. I want to hibernate, at least until winter reaches a peak. The trees are bare, the air is cold no longer, just damp. I want to smell dry wood roasting in a pub fireplace. Then I can start to believe in spice, cinnamon and ginger. I long for frozen ground and vast open skies. The promise of a hot cup of tea that warms me to the core.

A month passes, and the another. This is how much time passes before I realise I’m no longer moving. October is home to my final memories of doing something. The great covers of winter have buried the outside and I don’t have the strength to remove them. The brown, red and yellow leaves fall like snow, the dead flakes of summer. Do I prefer this colour scheme under a blue or a grey sky? Blue. Always.

The air is cold but the sun is out. I’m warm in no time. My coat and jumper weigh heavy in my bag. I’ve over-prepared. I’d already given up on the idea of camping again this year, justifying my decision on the quality of my equipment. This was the first of many excuses leading me to weekends spent sitting in the warm, ignoring the cries of the world to go out and be a part of it. A thrashing in the bushes makes me jump. I would have already passed the point they were hiding. I was on my way, minding my own business. None the wiser. They start choking on their own surprise before taking to the air with the subtlety of a North Korean missile test. It never ceases to amaze me how stupid the common pheasant is. Two kites launched out of the trees. They floated on the wind, tucking and spinning before soaring higher and higher. Soon, no doubt they would crash back down to Earth.

I’ve come to the highest point in South East England, Walbury Hill. I’ve been reading about Britain’s mountains. I wanted to get high and I haven’t yet been granted the gift of wings. The sky opens up a little, the earth rolls away, rising and falling but never quite reaching up to dominate the horizon. If nothing else at least I can see how far I’ve come. There are days now when I feel as though I’ve given up but in reality I crossed the finish line months ago. Everything that has happened since has been a bonus and now I deserve to be enjoying a restful few weeks before I start up again next year. Herein lies the problem of starting. Once you’ve set forth and the journey is underway, the itch never, ever fades. Scratching the surface doesn’t cut it. Those 50 miles I set out to walk at the start of this year lie finished some way behind me. Lyme Regis, or taking the path as far as Exmouth are already on my mind. 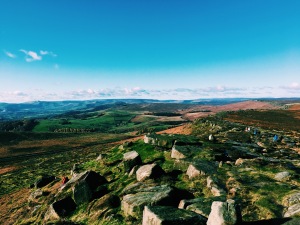 Shouldn’t my hunger be satisfied with that? My bigger than belly eyes are also glancing at Snowdonia, The Lake District, and what remains of the South Downs Way. Biting off more than I can chew might be good for me.  I’ve ticked off most of my to-do list for this year. The beers has continued to brew, this is my 11th of what I hoped would be 12 blog posts. The past 12 months have been good to me. Not the greatest of all time but its hard to remember that which was without anything but regret. All I can do now is glide into the final days of another revolution and do as many other will; start planning for a better 2018.