Ocean blue. Slush puppy blue. Ice pack blue. Arctic blue. Only I suppose in this light, you’d call it turquoise. None of these thoughts crossed my mind while I stood waist deep in the Celtic Sea as a wave crashed over my chest. My body suggested shock, my mind accepted. I’m only here because I refused to be outdone by a mother of two. If Katie’s going in, I’m going in. I know how this is supposed to happen. Run down the beach, trip, fall and hope to recover the move into some kind of dive. Too late for that. I had slowly walked out, feeling my body retreat as the water climbed higher. In the end I pushed off the floor, put my head under and started swimming. The initial cold shock didn’t last long, it settled into something more permanent. My hands turned purple and I caught the next wave back to shore. The sea hasn’t yet realised summer has arrived and probably won’t until its almost over. Katie took to telling me how amazing and life affirming swimming in the sea was. She was right, and I must have been too cold to argue. We went back in. As the marrow in my bones froze I thought maybe she was right. 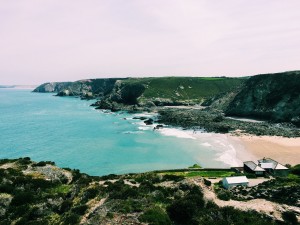 These are the early days, before the crowds arrive on the Cornish riviera. We’ve been lucky, the weather has been nothing short of glorious. With day trips out to Wheal Coates, St. Agnes coast, and an overnight stop on the Lizard peninsular I’ve knocked out small sections of the coast path without even trying. Looking at the high scores, it doesn’t surprise me to find two of the people who’ve done most of these sections with me are under 10. Some distance ahead of them, Nancy and I have now clocked double figures together. The rest of the names all the way to the top are me, alone, edging ever close to the 100km mark. Nearly 10% of the South West Coast Path complete. 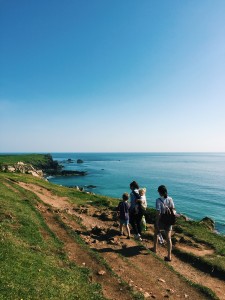 Doing more exploring and less forced marching across the cliff tops raised an important question: am I doing this because I enjoy it, or is it just a way to pass the time? Loaded up with a full inventory of gear I’ve found it difficult to stop and explore. Partly because it’s extra mileage, partly because it is quite literally a massive inconvenience. Sitting on a beach building sandcastles with a two year old is super fun, sitting on the grass in a dip between two cliffs wondering whether crying will make your legs feel any better, less so. Sharing the unrivalled joy of being outside with your friends, them knowing exactly what it is you’re about to say about the colour of that water is a wholly different experience to crawling into your tent after a day of multi-figure kilometers feeling physically exhausted but awesome. Both are good. And so we go again. 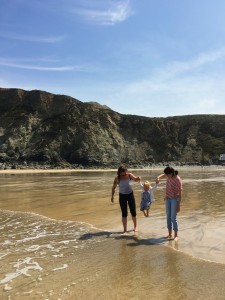 The next level is up ahead. Soundtracked by waves crashing on rock, checkpoints on clifftops, it’s more of the same but in a different order. In a bold move, I’ve reversed my route, now walking from Lyme Regis to Weymouth in the hope that tackling the boss fight first gives me a shot at success. Golden Cap turns up on day two, I hope the decision pays off. I have no fears about walking up, only coming down the other side. I’m arriving at the conclusion I’ve not put enough skill points into walking down steep slopes. My current approach of stick a leg out and let gravity do the rest probably isn’t working out so well. I’d like to avoid being forced to quit. There is a constant rattling, like a screw in a washing machine, in the back of my mind about my knees. Will they, won’t they. Should I get some new ones? I am scared of failing again. By now, I’d like to think that covering 50km across five days is achievable. Having already faced defeat on the cliffs of Purbeck, another beating is well within the realms of possibility. Giving up wouldn’t be the end; this is still progress. I have trained more, but it might not be enough. I’m just as worried about a successful play through. You get used to failure, it becomes the standard to which you hold yourself. If I get to the end unscathed it means next time I’m going to have to try harder. 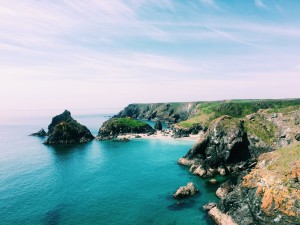 I’ve done some shopping in the last few months. I bought some new socks and when I pulled them on it felt like everything was going to be ok. You don’t expect a pair of socks to change your life, which is why they probably can. Equally, I’ve upgraded my boots, sleeping mat and meal plan. It would seem that I am getting closer to being the kind of person who does this sort of thing for fun, instead of just having something to talk about at parties that isn’t beer. The question though, am I ready? Probably not.