Dad and I were currently on the same page. We were the first up and out of the van again. We hit the same view points Mum and I had the night before. I realised now that I am not going to be especially upset if I have to do things like this twice. It’s a new day, the light is different, my excitement remained. This time I could hear the river from much further away. Today there was another sound; the distant rumble of thunder. The snow and ice was cracking, melting in the morning sun.

The blue skies, the still black mountains resting in their own shadows. It was worth getting up for. Dad and I discussed that if we timed things right, we should get back to the van to find that Mum and Lisa had breakfast on the go, or at the very least a cup of tea ready and waiting for us. We got back to the van to find it locked. They were nowhere to be seen. Rather than get started on the day’s chores, they too had gone for a walk of their own. We must have passed them on our way back. Our timing was all wrong. Our plan had failed.

We got ourselves organised, packed up, fed and ready for our first serious trek. Beyond Mueller’s Lookout was a route that continued up into Hooker Valley towards the base of Mount Cook. We followed a stream for long parts of the track. Crossing wobbly wooden suspension bridges that warned of only being able to take the weight of 20 people. I wasn’t hugely confident in the bridges with just the four of us on them.

Occasionally I’d find myself stopping to look backward out towards Lake Pukaki beyond the valley. It was easy to imagine that we were marching towards Helm’s Deep. Any second now the black smear of an army of 10,000 Uruk-Hai could appear on the horizon. It isn’t hard to see why Peter Jackson decided that New Zealand would make an excellent backdrop for his take on Middle Earth. 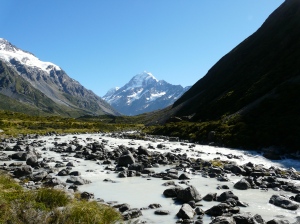 Mount Cook would come into and out of view as we rounded corners, climbed hills. It was increasingly difficult not to just stop and stare every few steps. The rich greens of the valley, the deep greys of the mountain walls, the pure white on the mountain peaks, all under a clear blue sky. When we finally crested the final ridge we had quite the surprise. There were icebergs in the lake below us. I had never considered the possibility of finding icebergs inland. The lake’s not even that big. Beyond the water was a low white wall of ice coated with moraine. Hooker Glacier. I found myself feeling a little underwhelmed. Perhaps it’s the distance. Maybe my expectations of what a glacier looks like are wrong. I think it’s the moraine. The surface of the glacier looks like an asphalt road. It’s not obviously a river of ice. I hope that those on the west coast are going to be more impressive.

After a bite to eat at one of the conveniently provided picnic tables, it was back the way we we’d came. It had only been a few hours since we’d left camp but the heat of the sun was already having an effect on the valley. Meltwater was pouring down the rock faces, the scree. Everything felt warmer, more alive, more like summer. We’d just seen ice in a lake. I don’t think Dad was the only one who found this a little bit strange, he just happens to be the only one comfortable enough to say it out loud. 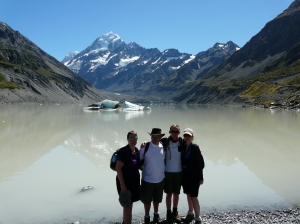 We got back to camp, piled into the van and proceeded to leave. Dad decided we’d better do one of those undesirable jobs that comes with being self-contained. Empty the toilet. We got to the camp’s drop point to find a family in the middle of their emptying process. Perhaps it was their first experience with a camper van. Top marks goes to the teenage son who took on the toilet. He pulled on one latex glove before continuing to do everything else with his naked hand. Eventually they were finished. It was our turn. The hose came out, the tone lowered. Toilet humour never gets old.

Job done. We could now hit the road. We didn’t have far to go. Hooker Valley joins up with the Tasman Valley. The meltwater from the glaciers in each combine with that from Mueller’s glacier to form the braided stream of the Tasman river. We turned off the main road, heading towards the Tasman Glacier. To reach the lookout we had another short walk up a very steep cliff. The path began narrow and winding until we reached what was little more than a wall of boulders. There was nobody coming down. It was close to impossible to know where the actual track was. We scurried about, heading ever up the cliff until we eventually made it to the summit. The view was impressive. Another milky grey glacial lake, filled with even larger icebergs. Thick black moraine lined the valley. Beyond the lake the valley floor appears to be perfectly flat. The streams, creeks and rivers shimmer in the afternoon sun. The Southern Alps rise aggressively, almost vertically. It doesn’t look real.

We clambered back down the rock face, made our way back to the van and hit the road again. We motored down the valley, crossing Dead Horse Creek amongst other strangely named dry tributaries. It makes you wonder, how different it all might look in spring. After the snow, before the big melt begins. Lake Pukaki passes by. It’s blue waters still giving rise to feelings of awe. A township called Twizel. An unusual name, perhaps the home of a spinning top, or a chewy meat snack. Who knows? Glacial blue canals pass under the road. Hydroelectric plants damn them along the way. We reach another lake, Lake Benmore. There’s a campsite on it’s shores. A spot next to a clear river, not even a hint of glacial blue. I think we’re all ready to call it a day, and what a day it had been.