By now I don’t think you need to be told who were the first happy campers up and about. Dad and I sat in the morning sun hypnotised by movements over the water. Towers of mist rose, twisted and turned like tentacles reaching up towards the warmth of the day. We watched as these tiny, fragile tornadoes span and broke away from the surface. Neither of us entirely sure of what was causing the mist to move in such a way. We could have been there for hours. Another spiral picked up, lifted itself from the surface, stretching out before snapping off and disappearing. The wind picked up carrying the mist away with it. 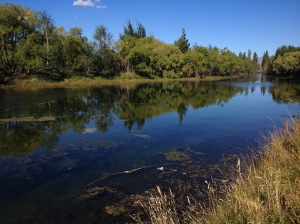 Having spent the night on the edge of Lake Benmore we decided to take a stroll along its shores before getting on with the day. Thanks to Lisa’s expert planning abilities we did have a spare day to play with between day one and our cruise in Milford Sound. This meant different things for different people. I had decided it meant we had a whole day in which we could and should do something else. Everyone else had decided that we could spread the itinerary out, slow things down and spend up to three hours in the mornings ambling about not really doing a lot. Yes, that’s right. Now I remember why it was that I had decided travelling solo was the way forward. 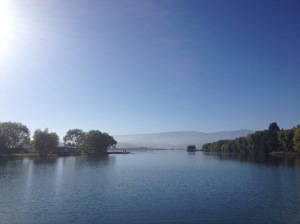 We walked down to the boat ramp. The site was appeared to be semi-permanent. Some of the caravans looked ancient, others had wooden structures built into them. We followed them down the lake edge slowly realising that we were probably going to have to stop and turn back as the tree line edged closer to the shore. A small white dog came to investigate, giving us a little bark to let us know he was in charge before scampering off back to his owner’s van if we got too close. A gentleman came out to see what all the noise was about. We asked him about walking around the lake. He directed us to what he called a track that went up the hill behind his ute. What he’d meant by track was almost vertical shingle slope. What we’d decided would be a casual stroll was about to become more testing for our wildly inappropriate footwear. We shuffle-crawled up the embankment. 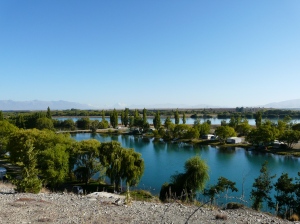 I reached the top first, turned to watch the others complete their ascent. Almost invisible through the haze Mount Cook basked in the sun on the horizon. The Southern Alps stretching out on either side like giant wings. The lively greens of the trees lining the edge of Lake Benmore contrasted with the dusty greys and browns of the arid land beyond. It was beautiful. Ripples appeared on the otherwise calm surface as trout or salmon breached. Two small motorboats sped across the lake. I’m not much of a fisherman, but if I was this wouldn’t be a bad spot for it. 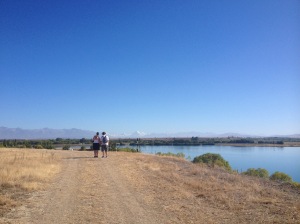 The moment was upon us that Lisa and I would begin our discovery of quite how difficult it was going be to get a nice photo of Mum and Dad while we were together. We already knew that if you try to take a photo of Dad he’ll definitely ruin it. He finds it both impossible to stop talking and smile on command  They walked ahead of us, hand in hand, looking quite the content couple. With the view I thought, hey, this might be a good opportunity for a picture. At first I tried to be sly about it. I took a candid shot from a distance. No good. I shouted ahead for them to stop walking so I could take a photo and they froze. Rabbits in the headlights. It was perhaps the least natural pose I had ever seen. It would be competing with plenty others for that title as the holiday progressed. At least it didn’t matter if we’d caught Dad with his mouth hanging open. 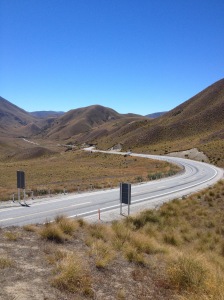 We left Lake Benmore along a mountain road that swept left, then right, then left again. We were following a stream that became a creek cutting the fastest route to the ocean. We wound our way deeper into the valley. The hills closed in. The creek dried up. Sooner or later it was going to spit us out. The camper van started to climb up the tussled, tufted mountains. We reached the top of the Lindis Pass. From here the mountains around us looked like rolling ridges of crumpled velvet. They looked as though they would be soft to touch if only you were able to spread your hand across their great range. It was another place that begged to be seen different in another season. At the start of spring, lightly dusted with a fine sprinkling of snow icing. 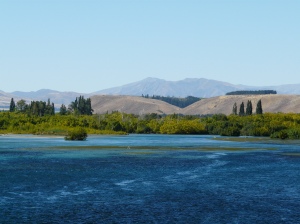 We emerged from the Lindis Pass at the north end of Lake Dunstan. At its tip the water was a marbled mix of the soft glacial blue and the much deeper blue that you’d expect a lake to be. As we drove it’s length it slowly became flatter, deeper and darker until we reached the township of Cromwell. Despite being aware of increased power of the sun in New Zealand between the four of us we had a grand total of zero long sleeved shirts to cover up in the heat of the day. My forearms were still a fantastic shade of cooked lobster pink. We’d got our timing spot on. Despite the day getting on a bit, the local Salvation Army store were open late with a two for one deal on everything. After a bit of rummaging around for the right size we all came away with some protective sleeves. 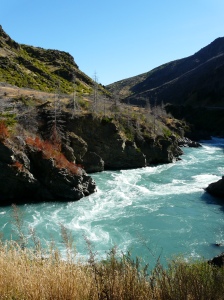 There were some big drives planned for the days ahead. The general consensus was that we should push on as far as everyone was comfortable with on each day to help reduce the bigger distances that we’d have to cover. The use of that spare day was finally agreed upon. We decided to continue on closer to Queenstown. We drove down the Kawarau Gorge, stopping at Roaring Meg to watch the river pound its way through the valley. Something was off with the scenery. Most of the pine trees looked like they were dead or dying. We’d seen this along the roads we’d travelled so far and couldn’t figure it out. This amount of dying vegetation would be a national crisis in other parts. In New Zealand it’s part of the conservation programme. These are wilding pines best described as introduced, alien or invasive. The plan is to get rid of them all, as in all invasive species, to give the native fauna and flora a chance to really recover. Big project New Zealand, good luck!

We stopped in Arrowtown a short distance from Queenstown. We pulled in to what my parents would refer to as an all singing all dancing campsite. Up until now we’d been taking advantage of the freedom camping and subsidised Department of Conservation campsites for a nominal fee. We were all excited by the prospect of having a real shower. It was time to get refreshed and recharge.